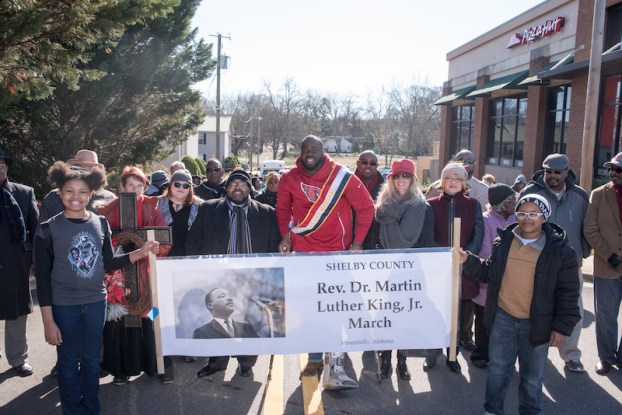 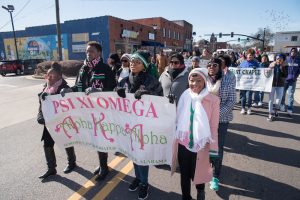 Members of the Alpha Kappa Alpha Sorority walk with other groups in the Unity March in Montevallo on Martin Luther King Jr. Day.

“Without him, we would not all be sitting in this room together,” Montevallo Mayor Hollie Cost said. “This is a community that signifies unity. That’s who we are, that’s what we do, and I’m so proud of that.” 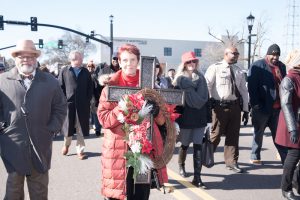 Kathy King, coalition co-leader for the Community Remembrance Project, carries a cross with a wreath during the march in honor of two African-American men who were lynched in Montevallo in 1889.

Cost’s next remarks were met with loud applause. First, she announced that Montevallo native Korey Cunningham, an offensive tackle with the Arizona Cardinals and grand marshal of this year’s Unity March, was selected as one of Montevallo’s Hometown Heroes to be honored at a breakfast in October. Then, Cost read a proclamation designating Jan. 21, 2019, as Korey Cunningham Day in conjunction with Montevallo’s annual observance of Martin Luther King Jr. Day. 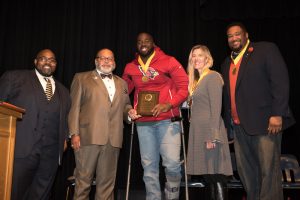 Korey, the son of Kathy and Kirk Cunningham, is the first person from Montevallo to be drafted in the NFL. He is a 2013 graduate of MHS and a 2017 graduate of the University of Cincinnati. He is undergoing rehabilitation after having foot surgery recently, but his mother said he should be properly healed in time for the start of the new NFL season. 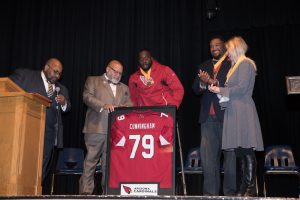 A framed replica of Korey Cunningham’s Arizona Cardinals jersey is unveiled. The jersey will be displayed at Montevallo High School.

As a surprise to Korey, a framed replica of his Cardinals jersey to be hung in a hallway at MHS was unveiled during Monday’s program.

“This will stand in honor of what you mean to Montevallo High School and the city,” NAACP Shelby County Branch President Kenneth Dukes said. “And now, we’re all Arizona Cardinals fans.”

Kathy said it was a proud moment for her and Kirk to see Korey honored for his hard work.

“We’re thankful for the city of Montevallo recognizing him,” she said. “It’s all paid off. We’re still in disbelief that he’s made it to this level in life. He’s so humble and a team person.”

Korey expressed his gratitude, too, and said, “No matter where I go, I always keep Montevallo on my mind, and I’m always praying.” 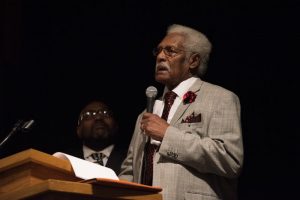 Pastor W.J. Posey of Coosa Valley Baptist Church in Vincent speaks after receiving the Recipient of the Year award. 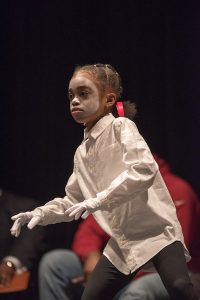 Madison Williams performs a praise dance to open the program.

Other presenters during the program included Master of Ceremony Coach Bobby “CP” Pierson; the Rev. Buddy Freeman, who delivered the opening prayer; and Kathy King, coalition co-leader for the Community Remembrance Project working in partnership with the Equal Justice Initiative to install a commemorative marker at or near the site of the lynchings in Montevallo.