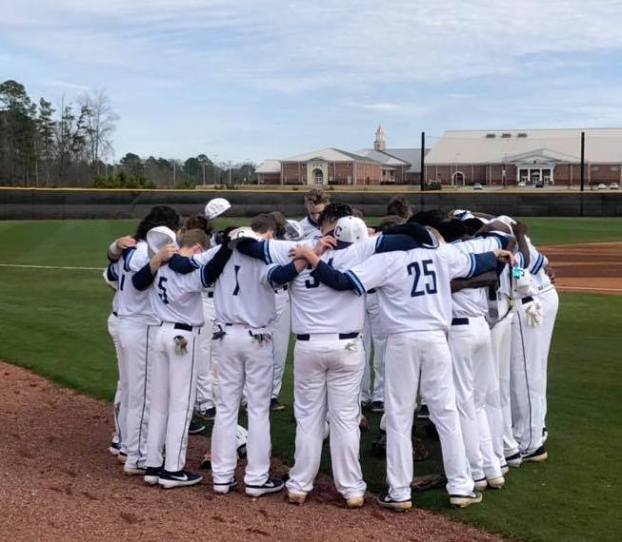 Calera started the 2019 baseball season with a 2-0 record after picking up two thrilling wins against St. Clair County. (Contributed)

CALERA – Nobody had a more thrilling opening day than the Calera baseball team, as the Eagles squeaked out doubleheader sweep against St. Clair County at home on Monday, Feb. 18, having to hold on for a two-run victory in the first game and then having to come back from four runs down in the final inning of the second game.

Both games gave the Eagles a good test of nerves early in the season, which can be a good thing throughout the season. A recap from each contest is below.

Calera fell behind 3-0 in the first game of the doubleheader, but came back with six unanswered runs between the second and fifth innings to take a 6-3 lead into the seventh, before staving off a late comeback.

St. Clair County picked up a double in the top of the seventh to threaten, and then a two-out single drove in one final run, but a strikeout one batter later by Noah Clayton closed the game out and preserved the 6-4 win and a 1-0 start for the Eagles.

Calera fell behind 3-0 early in the game after the Saints started the game with a triple and a double in back-to-back at bats to take a quick 1-0 lead.

While St. Clair was unable to pick up another hit the rest of the inning, or another baserunner for that matter, the Saints were able to score two more runs on a wild pitch and passed ball during the same at bat to take a 3-0 lead at the end of the first inning.

Calera finally got some positive to happen in the bottom of the second thanks to a leadoff walk by Christian Hall. Two batters later, M Gilbert drove Hall home on a line-drive single to right field to cut the deficit to two runs through two innings.

In the bottom half of the fourth, the Eagles capitalized and started the inning with a double and two consecutive singles to load the bases with no outs.

One batter later, Gilbert was able to single to center field to drive in one run. That was followed by a fielder’s choice during Jaxon Butterworth’s at bat to tie the game 3-3 before two ground outs ended the threat.

Calera, however, was in a good spot with pitching settling down and the offense waking up.

In the bottom of the fifth, Mason Blankenship and Hall put together back-to-back doubles to drive in two runs, before Gilbert added an RBI-single two batters later to give the Eagles a 6-3 lead at the end of the fifth inning.

The Saints were able to bring the game-tying run to the plate in the top of the seventh, but they were unable to score more than one run, as they never had the same pop at the plate after the first inning.

Blankenship went 2-for-3 at the plate with an RBI in the first game, while Hall was 2-for-2 with three runs scored, a walk and an RBI. Gilbert also batted 1.000 going 3-for-3 with two RBIs.

The second game had a much different feel, as Calera had to battle back after falling behind 4-2 through two innings and then 6-2 through the top half of the fourth inning.

To that point, the Eagles had scored just two runs on a two-run double from Quindarius Crews in the bottom of the first inning, which at the time gave them a 2-0 lead.

But in the bottom of the fourth, Calera was able to finally string some success together with one out. It started with a single from Cameron Medders, before back-to-back walks loaded the bases for Alijah Franklin.

Franklin stepped to the plate and laced a line drive to left field that got down for a double to bring home two runs, which cut the deficit to 6-4 at the time. Two more walks in a row led to another run crossing the plate, as the Eagles had made it a 6-5 game before a double-play ended the inning.

Calera was able to put up a quick run in the bottom half of the final inning thanks to a triple from K Prentice, but two outs were also quickly on the board leaving the Eagles down 9-6 with two outs in the inning and nobody on base.

Somehow, Calera answered in as clutch a way as they possibly could have.

It started with a four-pitch walk to Franklin, followed by a wild pitch that allowed him to move into scoring position. A pitch later, he scored when Graham Blankenship singled to center field. That was quickly followed by another single from Hall to put runners on first and second with Calera trailing 9-7.

Then stepped to the plate Crews, who with one swing of the bat was able to tie the game thanks to a bases-clearing triple to right field on the second pitch he saw, making the score 9-9 with the game-winning run now all of a sudden 90-feet away.

Graham Blankenship was up next, and after watching three straight balls and two strikes to make the count full, he nailing a line drive to left field to easily score Crews for the walk-off win to cap off a 2-0 opening day.

By ALEC ETHEREDGE | Sports Editor  ALABASTER – Despite hosting two Class 6A playoff teams from a season ago, including... read more