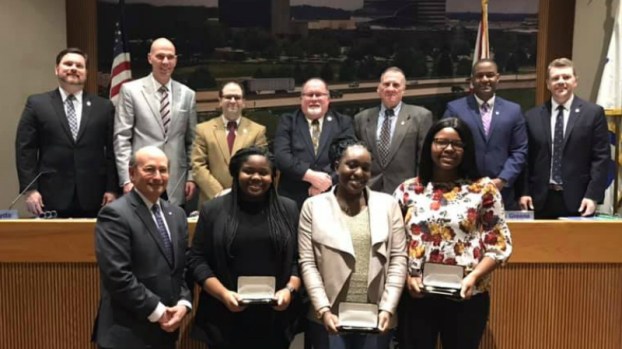 Ajah Robinson, Anthonia Anwah and Aiyana Hines were presented keys to the city by Mayor Frank Brocato at a meeting of the Hoover City Council on Monday, Feb. 18. (CONTRIBUTED)

Keys to the city presented for heroics following Hoover shooting

HOOVER –Thanksgiving Day 2018 will be remembered in Hoover for tragedy, with a man killed by a Hoover police officer, but the situation also produced inspiration.

Ajah Robinson, Anthonia Anwah and Aiyana Hines were presented with keys to the city by Mayor Frank Brocato at the Hoover City Council meeting on Monday, Feb. 18, because of their actions that day.

“Gunshots rang out and sent our mall into absolute pandemonium and fear,” Brocato said. “People were unfortunately running for their lives.”

An elderly woman fell and was injured during the chaos, Brocato said.

“These three young ladies, as everyone else was doing, were trying to get away from the gunfire, but they saw this woman down and in need of help, and they are actually all in the Gardendale High School sports medicine program, so they knew what to do,” he said. “They had been training on how to tend to injured athletes but football players in particular, so they knew what to do and immediately they let their training kick in and they stopped their car and went to that lady and rendered aid, and we are so grateful they had the skill to do it but we’re more grateful they had the courage to do that.”

The women performed a 45-degree lift and placed blankets and jackets underneath the victim to keep her warm until paramedics arrived.

It was only the second time of his tenure that Brocato has presented a key to the city.