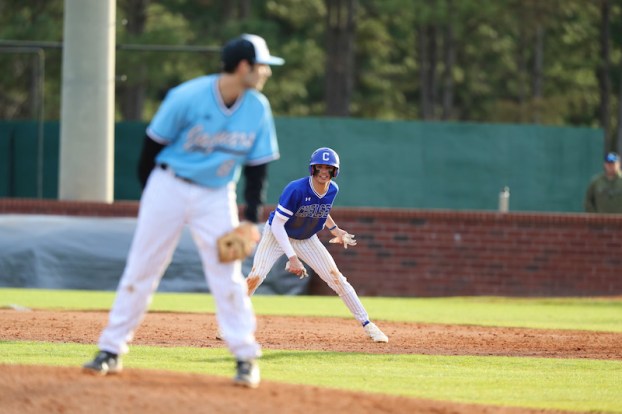 Chelsea and Spain Park met each other, while also playing a game against Prattville on opening day as both teams started 1-1 on the season. (For the Reporter/Robert Dean)

HOOVER – Playing in an opening day tournament at Spain Park High School featuring three teams, the Spain Park Jaguars and Chelsea Hornets were both able to split two games to start the season 1-1.

After playing to a 3-3 tie through three innings of play, a two-run spurt by Spain Park in the bottom of the fifth became the difference in a 5-3 win for the Jaguars to salvage a win on opening day.

The Jags struck first in the game thanks a walk and single to lead off the inning. While Chelsea answered with a double play, it allowed Lane Willis to cross the plate to give Spain Park a 1-0 lead after one inning of play.

Chelsea came right back to steal the lead back in the top of the second inning thanks to a triple from Brady Morgan, which drove in Carter Frederick to tie the game at 1-1. Two batters later, with two outs in the inning, Jacob Boyle was able to take the first pitch he saw and drive it to right field to bring home Morgan for a 2-1 advantage.

Spain Park, however, answered right back as the lead changed hands for the third half inning in a row in the bottom of the second. After a walk and a hit batter put two runners on, Jack Poist stepped to the plate and laced a double to left field to bring home both Adam Wygle and Foster Campbell to give his team the lead back at 3-2.

In the top half of the third, Chelsea couldn’t overtake the lead, but the Hornets were able to take advantage of an error and a single through the first two batters of the inning when Frederick singled on a hard ground ball to left field, which brought in Nolan Forehand to even the score at 3-3.

After four half innings with runs scored, the next three were quite as the score remained tied after the top half of the fifth inning.

Spain Park, however, got a spark in the bottom of the fifth when Colton Ledbetter hit a fly ball that got to the wall in right field allowing him to leg out a lead-off triple.

An error with one out two batters later allowed Ledbetter to come around and score, while Colby Mills advanced to second on the same error. Carter Sidor then capitalized during his at bat with a runner in scoring position by lining a ball to center field for a single that brought in Campbell, a pinch runner, to give Spain Park a 5-3 lead at the end of the fifth.

That was the final run Spain Park put up on the board, but Will May’s pitching helped close the game out. He tossed the final two innings, allowing just one hit and one walk, while striking out two.

Eli Copenhaver got the start for the Jags and went three innings allowing three runs, while striking out four. Linden Samaha pitched two innings in relief and allowed one hit and two walks.

The Jaguars were led by Ledbetter at the plate with a 2-for-3 day featuring one RBI and one run scored. Poist went 1-for-3 with two RBIs.

Chelsea had six different players pick up a hit in the game, while Frederick, Morgan and Boyle all added RBIs. Brock Hill started the game for Chelsea and tossed 1.2 innings allowing three runs, two hits and three walks, while striking out three. Jacob Tinnell added 1.1 innings and gave up one hit and one walk, while Frederick pitched the final three innings and allowed two hits, two runs and two walks in addition to three strikeouts.

The opening game of the day for the Hornets went much smoother throughout thanks to a consistent effort at the plate and a strong seven combined innings on the mound from Connor Ball and JT McGregor.

While the first inning went by scoreless, the second defined the game, as Chelsea was able to put together five runs in the inning to take a 5-0 lead.

Before an out was even recorded in the inning, Chelsea put together a walk from Will Peacock, a single from Jackson Webster, an RBI-double from Morgan, another walk from Austin Frye and a two-run single from Boyle to take a 3-0 lead.

After a pop out put one out on the board, an error and a fielder’s choice allowed two more runs to cross the plate for the Hornets, who had taken a 5-0 lead through two innings.

That was plenty of cushion with the success happening on the mound, but Chelsea added one more run in the fifth inning on an RBI-single from Boyle, before a two-run home run from Forehand and a run walked in by Frye ended the game’s scoring at 9-0.

Forehand wen 1-for-2 at the plate with three RBIs, two walks and one run scored. Boyle also had an impressive game going 2-for-3 with three RBIs in the game.

Spain Park was a little cold to warm up to the 2019 season, as Prattville took advantage of four runs in the opening inning and five in the top of the third to pull away for an 11-4 victory.

The Jags answered the four runs in the top of the first with two of their own thanks to a two-run blast over the right-field wall by Ledbetter, but didn’t score again until the bottom of the final inning, posting two more runs to create the final of 11-4.

Willis went 3-for-4 for Spain Park in the loss with one run and one RBI. Ledbetter added two RBIs after a 1-for-4 game, while John Poist added the final RBI going 1-for-3 at the plate. Jack Poist added Spain Park’s last hit.

By ALEC ETHEREDGE | Sports Editor MONTEVALLO – Josh Mims was revved up and ready to go on opening day... read more