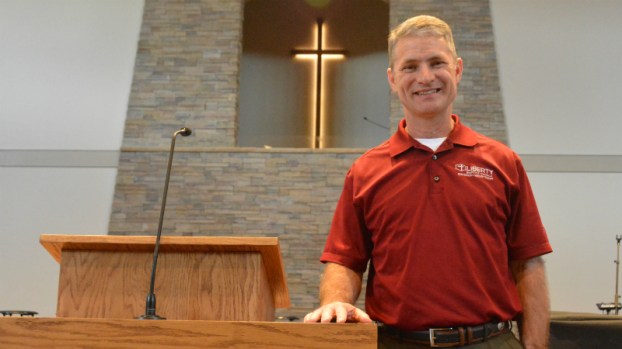 Tim Cox, who has been pastor at Liberty Baptist Church in Chelsea since 1998, was elected to serve as president of the Alabama Baptist State Convention. (REPORTER PHOTO/STEPHEN DAWKINS)

CHELSEA –Tim Cox, senior pastor at Liberty Baptist Church, is following in his father’s footsteps as president of the Alabama Baptist State Convention.

In fact, when Cox was elected to the position in November 2018, he became part of the first father-son combination to serve in the position.

Tim Cox nominated his father as president of the Convention in 2004, and then the father returned the favor by nominating his son in 2018.

Baptist churches are autonomous at the local level but cooperate with one another to further their mission, which Cox said is “The Great Commission” of Jesus Christ: to spread his teachings throughout the world.

There are county associations and then the state association, which is headquartered in Prattville and holds its Convention each year.

The Alabama Baptist State Convention encompasses 2,900 churches, each of which is granted representation at the Convention.

As president, Cox will serve as chief presiding officer of the 2019 Convention.

“When we gather, I moderate,” he said.

Between annual meetings, Convention bylaws provide that the Alabama Baptist State Board of Missions will be the “executive, administrative, fiduciary and promotional agency of the Convention.”

Cox said his goal is to keep the organization’s focus on “the main thing.”

“I hope to be able to keep us pointed in the right direction, and that’s the mission of the Great Commission—fan the flame that’s already there,” he said. “I want to serve and invest back into Alabama Baptists. A lot of people have invested into me.”

Cox’s role and responsibilities at Liberty will not change because of his position with the State Convention, he said, though he may at times lean on the Liberty staff for assistance more heavily than he would otherwise.

He will travel to Prattville for meetings during the week but not be required to miss church services on the weekends.

Cox grew up in Bay Minette and attended The University of Mobile and New Orleans Baptist Theological Seminary. He came to Liberty Baptist and Chelsea in 1998.

Field of Teal raises money and awareness for ovarian cancer

PELHAM – Pelham High School’s fifth Field of Teal baseball tournament to strike out cancer raised about $1,000 for the... read more