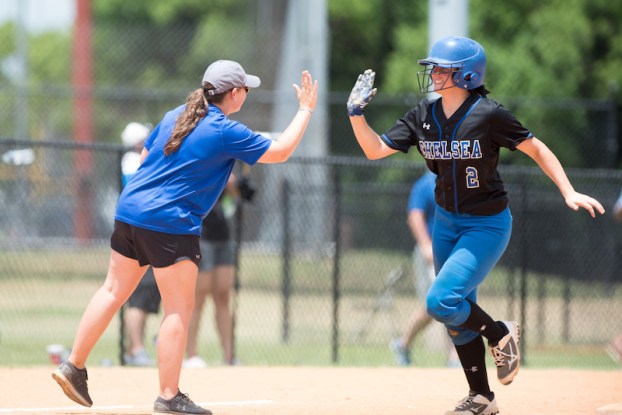 LEEDS – Since its state championship in 2016, the Chelsea softball team has been oh so close to returning to that glory each of the last two season after making impressive runs into the state tournament, but each of the last two years, the Hornets have come up shy of reaching that ultimate goal.

On Monday, Feb. 17, Chelsea kicked off yet another softball season, and it looks like the 2019 squad will be no different in challenging for that Class 6A crown after downing Pinson Valley, Mortimer Jordan and Leeds on opening day to start the season 3-0.

Competing at Leeds Memorial Park in the Leeds round-robin tournament to open the season, the Hornets had strong showings against Pinson Valley and Leeds, winning 6-1 and 4-1, respectively, while edging out Mortimer Jordan 9-8 in the middle game. A recap from all three contests is below.

Chelsea led its season opener 1-0 for the majority of the game, but in the top of the fourth, which was the final inning, the Hornets put five runs on the board to pull off a 6-1 victory.

In the top of the first, the Hornets got a one-out double from Skylar Baker to immediately threaten. That was followed by a pop out from Lexi Serio to put the second out on the board, but during her at bat, Baker stole third.

One batter later, Camryn Smith hit a pop fly to second base, but an error allowed Baker to cross the plate due to her running with two outs on the board, which gave the Hornets a 1-0 lead.

The next few innings were quiet offensively for Chelsea, but the Hornets didn’t need the offense at the time because of the way Abigail Bryars was pitching in the circle. She allowed one baserunner in the bottom of the first, got out of a jam in the second and got Pinson Valley 1-2-3 in the third to toss three scoreless innings.

Then, in the top of the fourth, the offense finally gave her a cushion.

It started with a single from Rachel Moore, before back-to-back walks to Landry Holt and Karson Rich led to Moore crossing the plate. A fielder’s choice and ground out put two outs on the board, but the ground out by Baker resulted in Holt scoring for a 3-0 lead.

After another walk to Serio, Smith doubled to right field, which cleared the bases to put Chelsea on top 6-0.

Pinson tried to threaten in the bottom half of the inning with the first two batters reaching base, but only one run resulted from it.

Bryars finished the game by allowing just three hits and one unearned run, while striking out eight batters. Smith led the Hornets at the plate with a 1-for-2 day featuring three RBIs.

The most thrilling of the two wins came in the second game of the day, as the Hornets put together an unbelievable come back in the final inning.

Trailing 8-4 entering the bottom of the fourth, Chelsea put together an impressive comeback that didn’t even see an out recorded in the inning.

Olivia Bergert and Baker started the inning off with back-to-back singles, before Brooke Burback loaded the bases by drawing a walk.

With no outs, Smith stepped to the plate and quickly found herself in a 2-0 hitter’s count, before driving a ball to left field for a single that brought both Bergert and Baker home to cut the deficit to 8-6.

Rich then stepped to the plate looking to do the same to tie the game. After a passed ball allowed both baserunners aboard to move into scoring position, Smith also took a 3-0 hitter’s count and drove a ball to the center field wall for a double that brought both runners in to quickly tie the game at 8-8.

One batter later, with Rich on second, Tyler Erwin stepped to the plate and in a 2-2 count hit a hard ground ball to second base, but an error not only allowed Erwin to reach base safely, but allowed Rich to score from second for the walk-off victory.

The final game of the day saw the Hornets pick up four first-inning runs and hold on for another victory thanks to more stellar pitching from Bryars.

In the top of the first, Chelsea did all of the damage it needed to.

With one out in the inning, the Hornets strung together six consecutive hits to put all four runs on the board.

It started with a single from Baker and one batter later a double from Burback to quickly give Chelsea a 1-0 lead. With Burback on second, Smith singled to center field to drive her home, before Rich then singled to right field to put runners on the corners.

Two more singles in a row from Serio and Chloe Eidson drove in both Smith and Rich for a 4-0 lead through the top half of the opening inning.

Bryars allowed one unearned run in the bottom of the second, but other than that she was on her spot, only allowing three walks and three hits, while striking out five.

At the plate, Baker went 2-for-3 with a run scored, while Burback, Smith, Rich, Serio and Eidson all picked up one hit. Four of those five also picked up an RBI.

By ALEC ETHEREDGE | Sports Editor HANCEVILLE – After a thrilling win to earn a spot in the Elite Eight,... read more