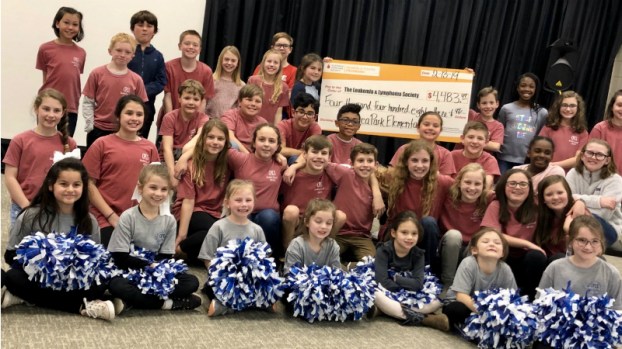 Chelsea Park Elementary School collected $4,483.99 for the Leukemia & Lymphoma Society of Alabama through the Pennies for Patients effort. (CONTRIBUTED)

CHELSEA – You would not have known it was the first time for Chelsea Park Elementary School students to participate in the Pennies for Patients effort as they brought in more than $4,400 for the Leukemia & Lymphoma Society of Alabama in one week.

The students, led by the student council and its sponsor, Jennifer Means, presented a check for $4,483.99 on Wednesday, Feb. 13, to representatives of LLS of Alabama at a school assembly.

On hand for the presentation were Kelli Parramore, campaign director, and Rebecca Habermann, executive director of LLS, and CPES Principal Jennifer Galloway.

“They just did awesome,” said Parramore, who taught at Chelsea High School prior to her position with LLS. “All the teachers were on board, and all the students were very excited. Chelsea is a great community.”

Cheerleaders added some spirit to the assembly, which also included student council members talking about different aspects of fundraising.

The money was collected during a one-week service learning project, titled “Bring the Change,” from Jan. 14-18.

Each day of the week had a different dress-up theme: Monday was PJs for Pennies, Tuesday was Neon for Nickels, Wednesday was Decades for Dimes, Thursday was Carbonated Drinks for Quarters and Friday was teacher’s choice.

In addition to the fundraising, students were presented STEM curriculum developed by LLS in their classes.

All Chelsea Park students in kindergarten through fifth grade participated, and a competition was held among the different grades.

One hundred percent of the money collected goes toward patient care (co-pays, travel reimbursement, etc.) and cancer research, Parramore said, and stays in Alabama because it is funneled through the University of Alabama Birmingham.