COLUMBIANA – A 47-year-old Alabaster man is being held in the Shelby County Jail on bonds totaling $16,000, after he was arrested and charged with sexually abusing an underage victim over a multiple-year period. 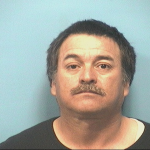 The Alabaster Police Department arrested Enrique Colin-Martinez, who lists an address on Peavine Street, on Feb. 23 and charged him with one felony count of sexual abuse a child younger than 12 and one misdemeanor count of second-degree sexual abuse.

The charges came after Colin-Martinez allegedly subjected a victim younger than 12 years old to sexual contact by touching her genitals and breasts “numerous times for several years,” according to Colin-Martinez’ arrest warrant.

Sexual abuse of a child younger than 12 is a Class B felony, and is punishable by up to 20 years in prison upon conviction.

As of Feb. 25, Colin-Martinez did not yet have a court date listed in Shelby County District Court.