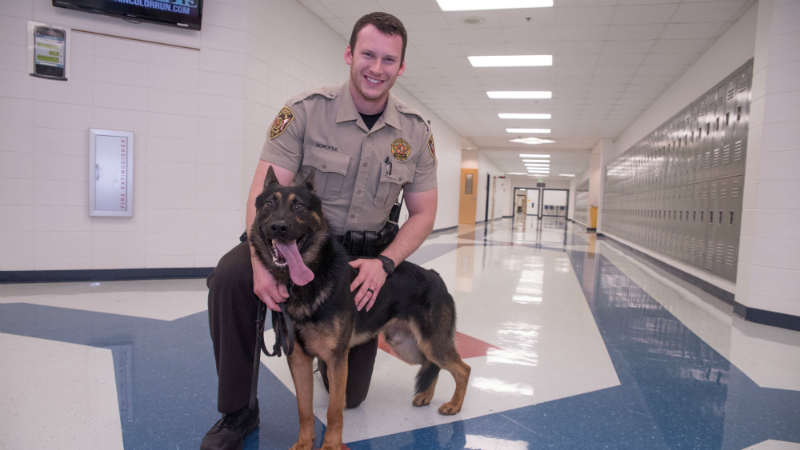 Thomas Nordyke and Trace have been stationed at Oak Mountain High School since 2018. (REPORTER PHOTO/KEITH MCCOY)

The Shelby County Sheriff’s Office in 2018 stationed the dogs, Trace and Kuba, and their handlers at Chelsea and Oak Mountain High Schools.

The Sheriff’s Office’s staff of SROs includes 15 officers including supervisor ?? Barnes, who has been in the role since January.

Barnes, who started with the SCSO in 2008, has experience with both narcotics and K9s. His police dog, Aksel, retired in 2015 and is still part of the family.

After the Sandy Hook Elementary School shooting in 2012, then-Shelby County Sheriff Chris Curry made the SRO program a priority—an effort that has been continued by his successor, current Sheriff John Samaniego, including reinstating the K9 program.

Both dogs are German shepherds and are 2 years old—in fact, they were born within a couple of weeks of each other.

Trace came from the Czech Republic and went through K9 school in Tuscaloosa County.

Upon completion of K9 school, Trace and Nordyke, and Kuba and Young, were assigned to their schools.

But first, they worked the U.S. Women’s Open at Shoal Creek in 2018 and were on patrol duty for about two months before starting at the schools.

Nordyke, a 206 OMHS graduate, begins a typical day helping with morning school traffic. The school provides an SRO office, where Trace stays in his crate.

Mornings also include communication with school officials about any situations they know about that have arisen.

Nordyke and Trace utilize their time at the school to become better at their jobs.

“If we’re not working, I do a lot of training with him during school,” Nordyke said.

Nordyke said the support of the school administration is crucial to an SRO being able to do the job effectively, and the students have also embraced he and Trace.

“The students love him,” Nordyke said. “They think he’s their dog.”