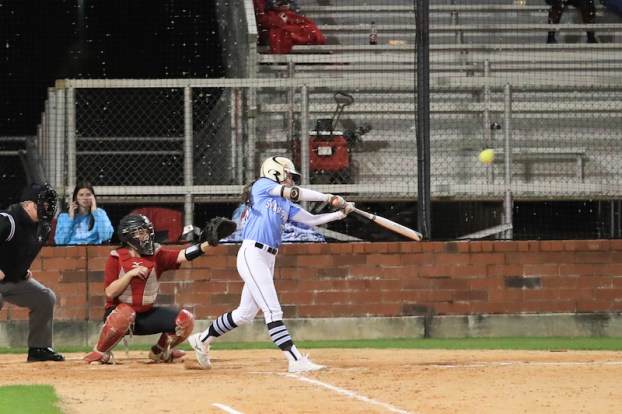 Spain Park’s softball team was able to take down Brookwood on Monday, Feb. 25, to bounce back from a tough loss to end the Sidney Cooper Invitational. (For the Reporter/Dawn Harrison)

Spain Park softball off to 7-1 start

HOOVER – After a 5-1 record at the Sidney Cooper Invitational over the weekend, where Spain Park was the two-time defending champion, the Jags picked back up two days later on Monday, Feb. 25, with a welcome home game against Brookwood.

The Jaguars (7-1), who lost to Alabama Christian Academy in the championship of the weekend tournament, were looking for a bounce-back victory on Monday, and despite falling behind 4-2 through the top-half of the fourth inning, they used seven combined runs between the bottom of the fourth and sixth innings to pull away for a 9-5 win.

In the top of the first inning, Brookwood was able to take advantage of a leadoff double by bringing home the game’s first run with an RBI-single followed by a wild pitch, which gave the Panthers a second run and a 2-0 lead heading to the bottom half of the inning.

In the bottom of the second, the Jags had an answer as they usually do. Annabelle Widra led the inning off with a walk, and despite getting caught stealing, Taylor Harrington singled to put a base runner back on first with one out.

That was followed by a single from Maddie Majors one batter later. Both moved into scoring position on an error by the catcher during the next at bat, and then on a line drive to left field by Caroline Wooley, another error was committed, which allowed Harrington to score and both Wooley and Majors to move into scoring position.

Alexis Anderson then stepped to the plate and hit a ball to the pitcher, who then committed a third error in the inning to allow Majors to score and tie the game 2-2 at the end of two innings.

Spain Park wasn’t having consistent offensive success to that point in the game, and in the top of the fourth, Brookwood capitalized by adding a fourth run on a fielder’s choice after a single and error put two players aboard.

After starting pitcher Kate Campbell hit the next batter, Widra entered the circle to take over.

She struck out the first batter she faced, and there was a quick momentum shift despite being down 4-2.

Spain Park knew Widra likely wouldn’t give up many more runs to Brookwood, which allowed the Jags’ bats to free up a bit and it quickly showed in the bottom half of the fourth inning.

After Lydia Coleman singled to kick off the inning, Widra stepped to the plate and helped herself out by driving the third pitch she saw deep to center field and over the wall for a two-run home run to tie the game at 4-4. The Jags added a double from Majors in the inning, but found no other runs, leading to the tie at the end of four.

With confidence offensively, Spain Park came back to the plate in the bottom of the fifth ready to take the lead.

With one out in the inning, Lindsay Parker doubled to left field, before Caroline Kendrick singled to second base to put runners on the corners. An error by the pitcher during Coleman’s at bat allowed her to reach base and eventually advance to second, but Caroline Keith was thrown out at the plate leaving runners at second and third with two outs.

The Jags weren’t going down without scoring a run, however, and after an intentional walk to Widra loaded the bases, Harrington also drew a walk to bring home Kendrick for the 5-4 lead, before Majors grounded out to end the threat.

Now with their first lead of the game, the Jaguars put together their best inning of the game in the bottom of the sixth to cement the win.

After a walk to Wooley, a single from Anderson and Bailey Bowers getting hit by a pitch, loaded the bases, Parker drew a walk to bring in Spain Park’s sixth run of the game. Kendrick then grounded out to second, but another run crossed the plate.

That was then followed by back-to-back singles from Coleman and Widra to drive in the final two of Spain Park’s nine runs.

Brookwood threatened in the top of the seventh with a walk and double bringing in a run to kick off the inning, but Widra then forced three consecutive outs to preserve the 9-5 victory.

At the plate, Widra finished the game 2-for-3 with three RBIs, two walks and a run scored. In the circle, she tossed 3 1/3 innings and allowed two hits, one run and one walk, while striking out six batters.

Majors and Coleman both went 2-for-4 and scored a run, while Coleman added an RBI and Majors added a walk. Wooley, Anderson, Parker and Kedrick all picked up hits in the win as well.