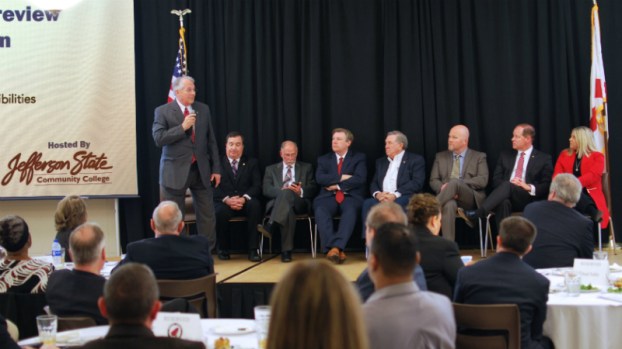 HOOVER – Alabama lawmakers representing Shelby County gave the local business community an idea of what to expect in the upcoming session during the Legislative Preview sponsored by The Shelby County Chamber on Thursday, Feb. 21.

Legislators at the event, which was held at Jefferson State Community College’s Shelby-Hoover Campus, said funding for infrastructure improvements would likely be the most talked about topic.

Rep. April Weaver (R-Brierfield) was the first legislator to speak and the first to mention a possible package for infrastructure.

As chairwoman of the Health Committee, Weaver said she would like to see legislation passed that would allow nurses to work in a compact arrangement that would make their licenses effective in 32 states instead of one—a measure that could help with a nationwide shortage of nurses.

Sen. Cam Ward (R-Alabaster) brought up the infrastructure package for a second time.

“The infrastructure is going to be the biggest part of our session,” Ward said.

As chairman of the Judiciary Committee, Ward said he wants to address legislation that would make it easier for former inmates to find work.

“That sounds elementary, but I promise you it’s making a big difference in reducing our crime rate,” Ward said.

Rep. Matt Fridy (R-Montevallo), an attorney himself, said he would seek in the upcoming session to address “case driving,” which is when attorneys solicit clients who have already signed agreements with other attorneys.

Fridy said he would also like to see college campuses designated as free speech zones.

Rep. Corley Ellis (R-Columbiana) said the funds sheriffs use to feed inmates at county jails could be a topic for legislation.

Leftover funds have been used for unrelated purposes in the past. Though Ellis said he worked with Shelby County Sheriff John Samaniego to avoid any problems locally, he said he would like to see a permanent state-wide solution.

Sen. Jim McClendon (R-Springville) told attendees about receiving an email warning him to not vote for a tax increase to fund infrastructure improvements.

“Welcome to the Legislature,” McClendon said.

McClendon said he sponsored a recent bill banning texting while driving but will seek to go further this session.

“Unfortunately, enforcement was essentially ineffective,” he said, because law enforcement officers could not determine if a driver was texting or using a phone for legal purposes such as making a call. But the Legislature could consider a bill to ban using a phone for any reason while driving.

McClendon said he will also sponsor a bill to give residents a chance to vote on instituting a lottery, with half the money generated going into the General Fund and the other half to the Education Fund.

Rep. Arnold Mooney (R-Birmingham) said he has enjoyed working with local government agencies—such as the ones representing Pelham, Helena, Alabaster and Shelby County.

“The joy of this job has been the opportunity to work with people outside the Legislature,” he said.

The newest member of the delegation, Sen. Dan Roberts (R-Birmingham), said the creation of The Shelby County Chamber was his first opportunity to work with local officials.

“It’s truly a light for the rest of the state to see how we can work together,” Roberts said and also touched on the topics of telemedicine and payday lending.