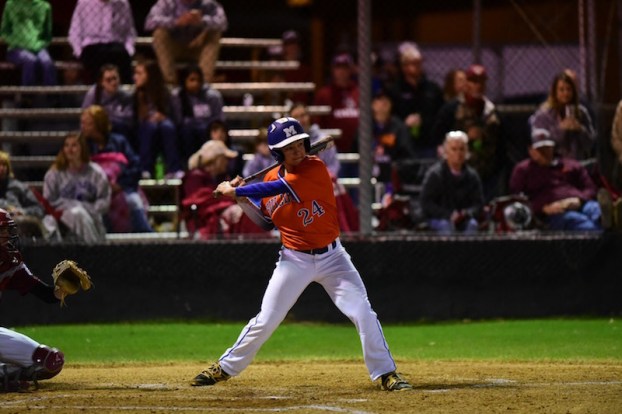 The Montevallo Bulldogs bounced back from their first loss of the season by taking down Verbena 15-2 on the road on Wednesday, Feb. 27. (Reporter photo/Keith McCoy)

VERBENA – Despite picking up just five hits, the Montevallo Bulldogs were able to pick up a dominant 15-2 mercy-rule road win in six innings against Verbena on Wednesday, Feb. 27, thanks to nine walks and four errors committed by the Red Devils.

While it was a 1-1 game through three innings of play, the Bulldogs picked up five runs in the fourth to open up the game, while then scoring nine more in the top of the sixth to seal the win.

Jay Dreyer and Baxley Shores were largely responsible for the victory as well thanks to an incredible effort on the mound that featured a combined 11 strikeouts.

Montevallo kicked off the scoring in the top of the first with thanks to a key two-out single from Cody Posey. He was able to score after Grant Cordes hit a ground ball to the shortstop that resulted in an error and him reaching base safely and Posey coming home for the 1-0 lead.

Verbena answered in the bottom half of the inning after a lead-off walk eventually led to a run crossing the plate after a steal, passed ball and fielder’s choice to tie the game through one inning of play.

The next two innings went by quietly, but then the Bulldogs were able to capitalize on mistakes by the Red Devils in the fourth inning.

After Cordes reached on an error and Clay Colley on a hit batter, Montevallo had the first two batters of the inning on base. A sac bunt from Baxley Shores moved both over, before another error on a hit from Dreyer drove in Cordes for the 2-1 lead.

That was followed by an RBI-single from Robbie Gallagher, before another walk loaded the bases for Malik Inabinette.

With the strong pitching on the mound, Verbena’s only threat the rest of the night came in the bottom of the sixth with one run, but Montevallo had basically ended the game in the top half of the inning.

Before an out was even recorded, the Bulldogs got walks from Shores, Dreyer, Whitson and Josh Mims, while Iabinette and Gallagher both picked up singles to drive in a combined three runs for a 9-1 advantage.

A sac fly by Campbell Cost put one out on the board, but allowed Inabinette to score, while Whitson scored on a wild pitch during the at bat to put Montevallo on top 11-1.

That was followd by two more walks from Kadarius Underwood and Brady Baugh, before a fielder’s choice from Shores and a double form Jamarius Carter drove in three more runs for a 14-1 advantage.

The last run of the game for Montevallo came one batter later when an error allowed Gallagher to reach base and Carter to score after he advanced to third leading to a 15-1 lead and eventually the 15-2 victory.