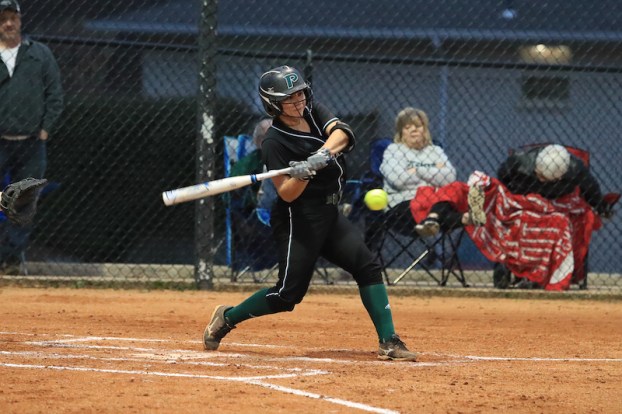 Pelham’s softball team used eight runs in the final three innings at the plate to pick up its first area win of the season against Calera. (For the Reporter/Dawn Harrison)

PELHAM – Despite giving up runs in more innings than they scored, the Pelham Panthers put together innings of bulk runs late in the game to pick up an area win against Calera at home on Tuesday, March 5.

The Panthers tallied nine hits and scored all eight of their runs between the fourth and sixth innings to pick up a 9-7 victory to improve to 6-2 overall this season and 1-0 in area play.

Pelham failed to score in the first three innings of the contest, and the Panthers quickly found themselves down 3-0 through the top-half of the fourth inning.

The Panthers, however, were able to wipe that deficit off the board quickly in the bottom of the fourth thanks to a spark from one of the team’s stars in Yoly Paredes, who led the inning off with a solo shot over the center-field wall to put Pelham on the board.

That was followed by a single from Holly Helms, a strikeout and a double from Hallie Burnett to put two runners in scoring position with one out. A sac fly from Madalin Petrock and a passed ball an at bat later allowed two more runs to cross the plate to tie the game 3-3 through four innings.

After Calera went 1-2-3 at the plate in the top of the fifth, the Panthers were able to take their first lead of the game thanks to two errors made by the Eagles. Back-to-back errors with two outs in the inning eventually allowed Paredes to cross the plate for a 4-3 advantage.

Despite having given up four unanswered runs and lost the lead, the Eagles still had some fight left.

In the top of the sixth, they took advantage of a walk from Jacey Thornton and single Baylee Head when a groundout allowed a run to score after a passed ball moved the base runners into scoring position.

Now in a 4-4 tie, Pelham did what it did to turn the momentum earlier in the game when Burnett led off the bottom of the sixth with a solo home run to put the Panthers back on top. A Petrock single followed before an out was recorded.

Then Laruen Watts doubled Petrock in and Kaylin Tomlinson doubled Watts in for two more runs and a 7-4 advantage. The final run came when Paredes hit an RBI-single to left field allowing pinch-runner Brooke Monti to score.

Brianna Copeland got the start in the circle and tossed a complete game featuring 11 strikeouts.

Calera were led by Marfice and Emma Harrison with both going 3-for-4. Marfice was able to tack on three RBIs, while Harrison scored twice.

By ALEC ETHEREDGE | Sports Editor PELHAM – For the second time this season the Oak Mountain Eagles were able... read more