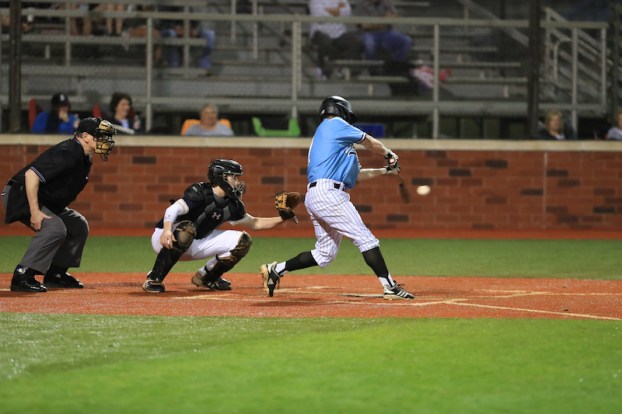 Spain Park’s baseball team was able to sweep a doubleheader with Brooks on Tuesday, March 5, to improve to 7-3 overall this season. (For the Reporter/Dawn Harrison)

HOOVER – The Spain Park Jaguars are starting to click on the baseball field, and on Tuesday, March 5, they were able to pick up a doubleheader sweep of Brooks High School at home to grab their fifth win in the last six games with that lone loss being by one run to Hueytown.

The Jags (7-3) not only bounced back from that loss to the Golden Gophers by beating them 10-4 later that same day, but have now won three in a row after taking down Brooks 10-1 and 8-3 behind strong pitching and an impressive attack at the plate. A recap from the two games is below.

Game one of the doubleheader featured a consistent effort from the Jaguars thanks to at least one run in the first four innings, including two in the second and third and four in the fourth, while Matthew Robbins had a strong outing on the mound.

Robbins tossed six of the game’s seven innings and allowed just three hits and one unearned run while striking out six batters, before Ashton Cobb closed the game out with a perfect final inning.

At the plate, Spain Park scored its first run of the game in the bottom of the first thanks to a lead-off triple form Colton Ledbetter. H was driven in on a sac fly from John Poist to quickly put the Jags up 1-0.

Brooks tied the game in the top of the second thanks to an RBI double, but it was tough for them to keep up with the consistent effort at the plate by the Jags for the remainder of the game.

In the bottom half of the inning, Jack Post hit an RBI-single to center field to drive in James Robert Lambert. Two batters later, Jack Poist was able to score on an error by the shortstop with Ledbetter attempting to steal second, which put SPHS on top 3-1.

The Jags added two more runs an inning later when Ethan Smallwood blasted a two-run homer over the left field wall to extend the lead to 5-1.

Then Spain Park really opened the scoring and put the game away in the bottom of the fourth thanks to Adam Wygle and Carter Sidor. Both hit double sin the inning that drove in two runs for a 9-1 advantage. The Jaguars’ final run of the game came in the bottom of the sixth on a sac fly from Sidor.

Wygle led the way at the plate with two hits thanks to a 2-for-3 game featuring one RBI and two runs scored. Sidor went 1-for-2 and had a game-high three RBIs. Smallwood added two RBIs after a 1-for-3 game, while four others added a hit.

The next game was a much different story. Instead of a consistent effort of scoring runs, it was an onslaught of runs as part of a late rally in the sixth inning to pull off the 8-3 victory.

Spain Park’s pitching remained solid with three different guys allowing just three runs and three hits while striking out a combined eight, but the bats were a little slower to get going.

The Jags found themselves down 3-1 entering the bottom of the sixth with time running out, but a seven-run explosion in the inning led to the 8-3 victory.

Brooks was able to take a 2-0 advantage in the top half of the first thanks to an RBI-double and a sac fly.

Spain Park tried to tie the game in the bottom half after a walk and single put tow aboard before a fielder’s choice from Wygle drove in the Jags’ first run, but that was their only run over the five innings of the game.

In the top of the fifth, Brooks was able to add a third run after two passed balls brought home the lead-off batter, who reached base on an error.

Finally, after seeing base runners reach in the previous two innings, and coming off a 1-2-3 inning defensively, Spain Park came to the plate in the bottom of the sixth and quickly loaded the bases thanks to a double from Robbins, a walk from Braden McNees and an error that allowed Smallwood to reach safely.

Another error on a ground ball from Sidor allowed the Jags to score their second run of the game, but after two consecutive strikeouts, it looked like that may be all of the damage despite the bases still being loaded.

Then their bats woke up. Specifically, the bats of John Poist and Willis. The two strung together back-to-back doubles, the first of which was a bases clearing hit, which led to a combined four runs crossing the plate for a 6-3 lead.

After a walk to Wygle, Robbins stepped to the plate and hit a third double in four at bats to drive in the seventh and eighth runs to close out the 8-3 victory.

John Poist had a game-high three RBIs with a 1-for-2 game at the plate, while Robbins drove in two runs after going 2-for-4. Willis went 2-for-4 with one RBI.

By ALEC ETHEREDGE | Sports Editor NORTH SHELBY – It’s been a momentous start to the 2019 baseball season for the... read more