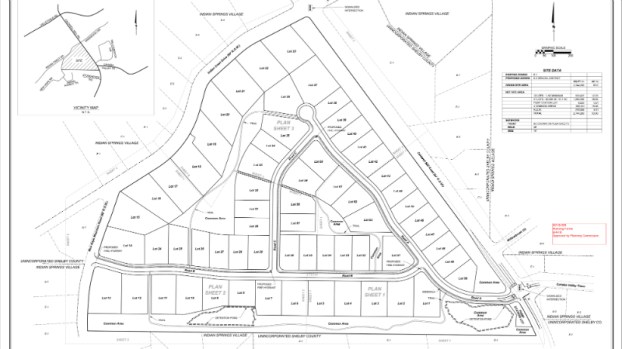 The proposed plan for Rushing Farms calls for 63 lots on 63 acres.

Planning Review Board to consider resident’s objection to planned subdivision

NORTH SHELBY – Residents in North Shelby County are still fighting a planned development they say would not be consistent with other properties in the area.

A re-zoning was approved by the Shelby County Planning Commission on Feb. 4 for 63 acres of land near the intersection of Caldwell Mill Road and Indian Crest Drive, clearing the way for Harris Doyle Homes to develop a 63-lot subdivision.

The Commission’s decision changed the zoning from E-1, which requires lot sizes of at least 1 acre, to E-2 Special District, which will allow the developer to include some lots that are smaller than an acre.

The developer said at the Feb. 4 meeting that the re-zoning was requested so that the site plan could include green spaces, a larger buffer and two detention ponds to control stormwater runoff.

Many residents in the area were unhappy with the plan, as they filled the meeting room to capacity and even lined the hallway outside.

And since the Commission’s decision, some residents requested a hearing by the Shelby County Planning Review Board, which reviews decisions of the Planning Commission to determine if there is sufficient reason to request that the Commission reconsider its initial decision.

The hearing is scheduled for 3 p.m. on Tuesday, March 12, in the Community Room of the Shelby County Services Building in Pelham.

If the Review Board does not find grounds for a reconsideration, the only appeal left for the residents would be to Shelby County Circuit Court.

The Review Board is made up of the county’s engineer, environmental manager, utilities manager, planning services supervisor and department of development services manager.

The request for an appeal states that residents were “stunned” when the Planning Commission went against their wishes and approved the rezoning by a 4-2 vote.

“[Residents in the area] chose to live and raise their children in a community that was not overcrowded—an area with trees, large lots, open spaces,” the request states. “With only a few days notice of a zoning hearing, more than 200 people showed up at this meeting, after a long work day, so that their objections would be heard—literally and figuratively. Neither occurred at this meeting.

“The facility was inadequate—the room was too small for a meeting of this importance. The room was very hot. Many people had to stand in the hall, some simply left. No one could hear. There was no microphone. We soon found out…that it didn’t matter. The board members weren’t listening! Voters should be afforded a proper setting to voice their protests which means adequate space and proper equipment to present their views. This was not the case…Voters who are adversely affected by potential development should be the first and primary concern of the board and their decisions.”

Officials estimated that about 57 lots could have been developed at the site without a change in zoning.

The developer said the re-zoning was requested because, once roads were mapped based on the site’s topography, slightly smaller lots were more feasible.

Access to the development will be from the Caldwell Mill Road intersection with Cahaba Valley Trace (where a three-way intersection will become four-way) and off New Hope Mountain Road.