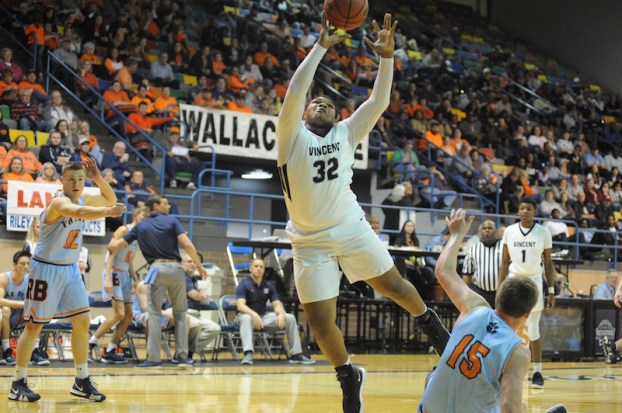 Vincent’s Chris Hardie, as his team’s only senior, averaged a double-double for the Yellow Jackets and was one of the strongest leaders in the county to earn the 2018-19 Shelby County boys basketball Player of the Year award. (Reporter photo/Alec Etheredge)

After his teammate laid the ball in with the final seconds ticking off the clock in a Sweet 16 victory, Vincent’s Chris Hardie took off running from one end of the court to the other swinging a towel over his head before jumping into the arms of a teammate and pointing to the sky with one finger.

In that one moment, you got a culmination of not only what that win meant to send the Yellow Jackets to the Elite Eight, but what Hardie’s career meant to him at Vincent as the team’s only senior this season.

He eventually broke down in tears hugging head coach John Hadder, and again pointed to the sky to thank the Lord, while his teammates all immediately ran to him to congratulate him. That’s a leader, and someone this team respected.

For the season, Hardie was one of only two players in Shelby County to average a double-double with 11.6 points and 10.4 rebounds per game, but his leadership as the only senior on the team was second to none and the biggest reason he has been named the 2018-19 Shelby County boys basketball Player of the Year.

This was arguably the toughest decision I’ve made on a player of the year in three years due to players like Hayden Lamey at Briarwood, Cornelius Brown at Calera, Daniel Washington at Chelsea and Chris Brown at Pelham all having standout seasons and averaging more points per game, while playing big roles on their team as well.

Daunte Cave and Caden Pierce, both members of the Helena Huskies, had great seasons as well to lead their team to the Sweet 16, while Jamarius Carter put together close to a double-double for the Montevallo Bulldogs.

While the majority of those players added more points per game and were close in rebounds per game playing against higher level competition, it couldn’t detract from what Hardie meant to his team. All of those players were the best of the best this year, but Hardie’s ride was special.

Without his leadership, Vincent would have still been a good team, and likely would have at least made the postseason, but the Jackets would have been a young team without that experience, which would have made them wildly inconsistent.

His ability to buy in as a team player and help the Jackets when they may try to do too much by themselves was possibly the most impressive aspect.

Specifically, telling younger players in the Sweet 16 win and even the Elite Eight loss what to do if they were in the wrong place, hanging their heads or not giving the effort they needed to.

Not only did he impact his team by being on the floor this year, but his impact will be felt by the younger players for years to come, especially next season with several key seniors now ready to step into a leadership role.

I understand the competition level was more difficult for every other player in the running this year, but that doesn’t replace what you see in person covering these players all year, and one thing became clear—Hardie is a special person.

He’s been an example at Vincent both on the floor and in the school, leading not only his teammates but his fellow students. He truly represents what being player of the year is about.

PELHAM – The Shelby County Chamber brought together mayors and city leaders from throughout the county on Wednesday, Feb. 27,... read more