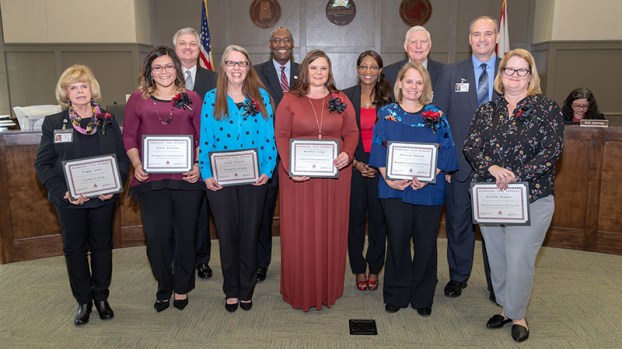 ALABASTER – When many people think of a successful school system, their attention likely immediately turns to the teachers, administrators and School Board members. However, the Alabaster Board of Education took time during a recent meeting to shine the spotlight on support staff members who sometimes may be outside of the public eye.

“There is so much that goes into making a school system run, and we want to take the opportunity to recognize some excellent support individuals in our schools,” Alabaster School Superintendent Dr. Wayne Vickers said during a March 11 School Board meeting.

Every year, ACS honors its top support personnel separate from the system’s Teachers of the Year, and dedicates a meeting to honoring them.

During the meeting, Vickers and the BOE members honored the top support staff chosen by their peers at each of the city’s six schools:

During the meeting, the School Board also honored its Bus Driver of the Year, Counselor of the Year and Child Nutrition Program Employee of the Year:

-Leslie Farwell was named the CNP Employee of the Year

-Wendy McNish was named the Counselor of the Year