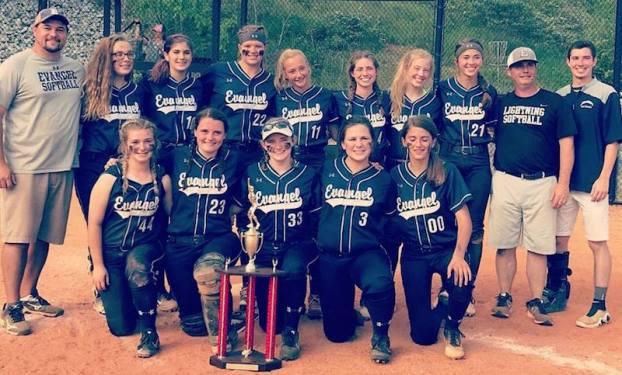 The Evangel Lighting softball team, above, as well as the baseball team are both off to incredible starts to the 2019 season. (Contributed)

The baseball team took down East Central by a combined 25-1 and dominated both games from start to finish to remain perfect on the season at 7-0, while the softball team also dominated with a 16-1 victory to improve to 4-1 this season.

The softball team wasted no time in its win putting up 10 runs in the bottom of the first to take command early, which led to the shortened three-inning game thanks to the mercy rule.

In the first five at bats, Kaylee Fowler and Lola Jarrad both doubled, Anna Donegan and Avrie Ponder were both hit by pitches and Ivie Littleton walked. All of that allowed for three runs to quickly cross the plate.

After two consecutive singles form Chloe and Presley Thornton and a wild pitch, the Lightning had taken a 7-0 lead.

Later in the inning, with two outs now on the board, Littleton and Donegan were able to hit a double and triple in back-to-back at bats, respectively, making it 9-0. Then the damage finally came to an end when Donegan scored the innings 10th run on a passed ball.

An inning later, Evangel added five more runs highlighted by an RBI-single from Ponder and an RBI-triple from Littleton for a 15-0 advantage through two innings.

Hope added one run in the top of the third, but the Lightning followed that up with the final one of the game in the bottom half of the inning thanks to an RBI-single from Susie Landis.

In the circle, Donegan picked up four strikeouts and allowed no hits in two innings, while Littleton struck out one and allowed one run.

The baseball was able to add two mercy-rule victories after impressive bats at the plate and just as impressive pitching on the mound, allowing one combined hits between the two games.

In the first game, Dawson Humphries got the start on the mound and picked up a no-hitter in a four-inning victory, while striking out eight batters and walking two.

He allowed the Lightning to be free at the plate, and it paid off starting in the first inning.

In the bottom of the first, Evangel added its first run on a ground out from Carson Monroe before Charlie Yeager brought him in one batter later with an RBI-triple to put the Lightning up 2-0 through one inning.

Evangel really opened up the scoring in the second thanks to five runs highlighted by a lead-off single from Seth Harrison, a single from Will Ferrell, an RBI-single from Monroe and a two-RBI double from CJ Carr.

After a 1-2-3 inning defensively, the Lightning came back to the plate and put the game away with five more runs in the bottom of the third.

An error on a ground ball from Will Akin made it 8-0 with Harrison scoring, before Chase Jones cleared the bases with a triple two batters later for a 10-0 advantage.

Yeager then hit a ground ball with two outs that caused an error and another run, before Carr brought in the game’s final run with an RBI-single to complete the 12-0 win.

The second game of the doubleheader saw Evangel fall behind 1-0 after the first inning, but from there, the Lightning settled in and dominated.

Weston Akin picked up the win tossing four innings and allowing one hit and one run, while striking out eight batters.