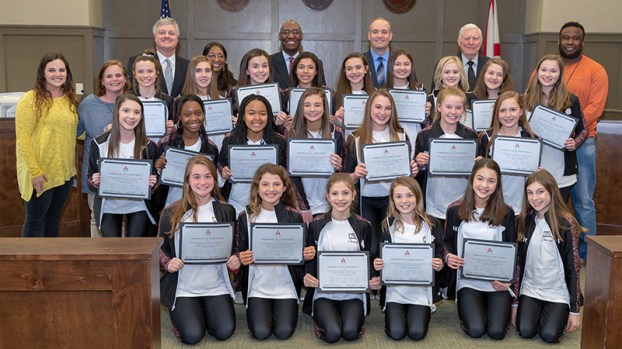 Members of the Alabaster School Board honor the Thompson Middle School cheerleaders during a March 11 meeting. (Reporter Photo/Neal Wagner)

ALABASTER – The Thompson Middle School cheerleaders have had plenty of experience spending time in the spotlight over the last several months, as they won a gamut of awards at multiple regional, state and national competitions during their 2018-2019 season.

Although the team’s season is now over, the accolades are still pouring in.

The team, which is coached by Suzanne Lee, Richard Sutton and Lindsey Claire Weathers, had strong showings at several competitions during the season.

In October 2018, the team placed second in the Junior High Game Day category, and placed fourth in the Traditional Large Junior High categories at the Tennessee Extreme Regional competition in Brentwood, Tennessee.

At the AHSAA State Championship in mid-December 2018, the team were named state champions in the Junior High Game Day category, and placed second in the Traditional Large Junior High category.

THS cheerleaders honored during the School Board meeting were:

By ALEC ETHEREDGE | Sports Editor  ALABASTER – Coming off a trip to the Super Regionals during the 2018 season,... read more