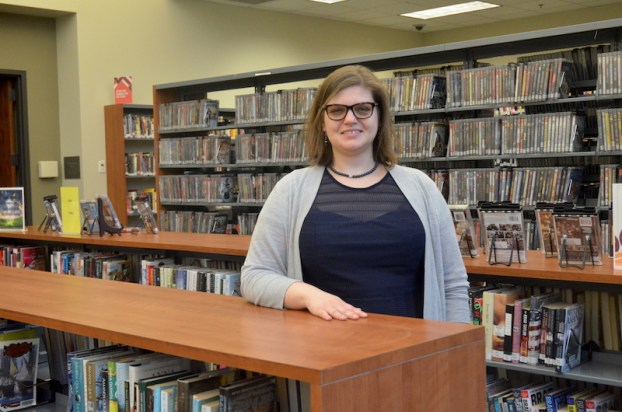 Lauren Bartell ended her stint as Parnell Memorial Library’s director to start a new position at the Air University’s library at Maxwell Air Force Base in Montgomery this month. (Reporter Photo/Emily Sparacino)

MONTEVALLO – Three days after her last day as director of Parnell Memorial Library, Lauren Bartell started her new job in the state’s capital.

Bartell, 30, is working in the electronic services department of the Air University’s library at Maxwell Air Force Base, handling website development, managing technology and doing some reference work.

“My husband is a federal employee, so I’ve always kept my eye out for an opportunity like this,” Bartell said. “It’s the largest military library in the U.S.”

Bartell’s stint at Parnell Memorial Library was as unexpected as her becoming a public library director at all.

“I started out going to graduate school to be an archivist because I studied history,” she said. “From there, I fell in love with libraries.”

The Chicago native earned her master’s degree in library science from Wayne State University in 2012.

Her husband’s work brought the couple to Alabama in early 2017. She was working as the reference librarian at the Montgomery City-County Public Library when she said the state’s need for more trained librarians became clear to her.

“The libraries in Michigan are in general more professionalized,” she explained. “They have requirements from the state level for funding, as far as librarians have to be trained, meaning they have to have that master’s degree for libraries of a certain size. Here, the only requirement for state aide for a public library is the board select a qualified librarian, without any specific requirements.”

She took the lead at Parnell Memorial Library in September 2017.

“It’s been a wonderful experience,” she said, adding she enjoyed working with different groups of citizens in the community, such as the University of Montevallo, City Council, Montevallo Chamber of Commerce and other organizations. “I really enjoyed that aspect.”

Other highlights for Bartell included receiving a grant for a bilingual collection and securing funding for a new roof at the library.

Full-time librarian Jennifer Key is serving as Parnell’s interim director until a permanent director is named.

“I’ve really enjoyed working with this community,” Bartell said. “It’s a community that really cares, and I’ve never encountered anything like it before in all my years of public work. It’s really a one-of-a-kind town.”

PELHAM – More than 5 million Americans and about 121,000 Alabamians are estimated to have a developmental disability or delay.... read more