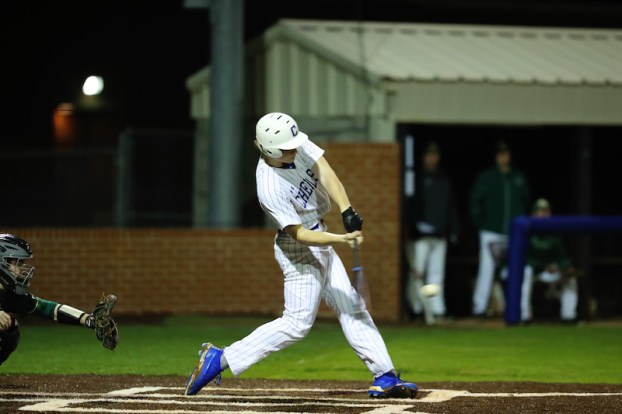 The Chelsea Hornets were able to score four unanswered runs in the second half of the game to down Calera for an area win on Tuesday, March 19. (For the Reporter/Cari Dean)

CHELSEA – A total of 13 hits at the plate and a combined effort from Connor Ball and JT McGregor on the mound, the Chelsea Hornets eventually became too much in the final four innings to pull away for their first area win of 2019 with an 8-4 victory over county foe Calera on Tuesday, March 19.

The Hornets (9-6, 1-0) broke open what was a 4-4 tie heading to the bottom of the fourth with their second three-run inning of the game to pull ahead 7-4, before adding an insurance run in the bottom of the sixth to pull away for the win.

Early in the game, Chelsea’s offense showed it would be tough to deal with throughout the game thanks to three runs in the bottom of the first.

It all started with two outs in the inning from the game’s strongest performer at the plate when Bennett Horton picked up his first hit of the night—a triple. With two outs on the board, that was followed by two consecutive walks to load the bases and make the threat even more dangerous.

Then, in clutch fashion, Jacob Tinnell and Brady Morgan lined back-to-back singles to drive in a combined three runs for an early 3-0 lead.

After a quiet second inning, Calera (6-11, 0-1) came to the plate in the top of the third looking for a big answer.

With one out in the inning, Riley Gay, Alijah Franklin and QuinDarius Crews each singled to load the bases. That was then followed by a crushed hit from Christian Hall that hit the grass in left field to allow him to leg out a triple and two runs to cross the plate.

Hall eventually ended up on third after the throw and two at bats later, that became key on a groundout from Graham Blankenship, which allowed Hall to cross the plate for the game-tying run.

Now in a 3-3 tie heading to the bottom of the third, Chelsea didn’t take long to snatch the lead back.

After back-to-back singles from Horton and Carter Frederick to lead off the inning, two outs were put on the board to cool down the threat. Morgan, however, wasn’t going to let Chelsea get out of the inning without another run. He hit a two-out single that drove home Horton for the 4-3 lead through three innings.

Calera came right back in the top of the fourth with a two-out RBI-single from Franklin to quickly tie the game again thanks to great base running from Kobe Prentice throughout the inning.

Chelsea, however, took the back-and-forth game and squashed it in the bottom half of the inning with another three-run inning.

It started with back-to-back singles from Adam Reaves and Jacob Boyle, before Nolan Forehand doubled to left field to drive both baserunners home. That was then followed by Horton’s third hit of the game with an RBI-single to put Chelsea up 7-4.

After back-to-back walks loaded the bases again with no outs, Jaxon Butterworth was able to get a break on the mound with a double play and strikeout to end what could have been a much more damaging inning.

The Hornets, however, had opened up the game and after an RBI-single from Will Peacock in the bottom of the sixth, they closed the door on the 8-4 victory.

Horton finished the game 4-for-4 at the plate with one RBI and three runs scored, while Morgan and Forehand each added two RBIs. Morgan and Boyle both had two hits in the game, while every player reached base for Chelsea in the game.

Ball went five innings in the start and allowed five hits and four runs while striking out six to pick up the win. McGregor tossed the final two innings and allowed just one hit and struck out three.

Calera was led by Hall, who went 1-for-2 with two RBIs, while Franklin went 2-for-4 with one RBI. Graham Blankenship also had an RBI.

By ALEC ETHEREDGE | Sports Editor ALABASTER – Despite falling behind 1-0 in the top of the first, the Thompson Warriors... read more