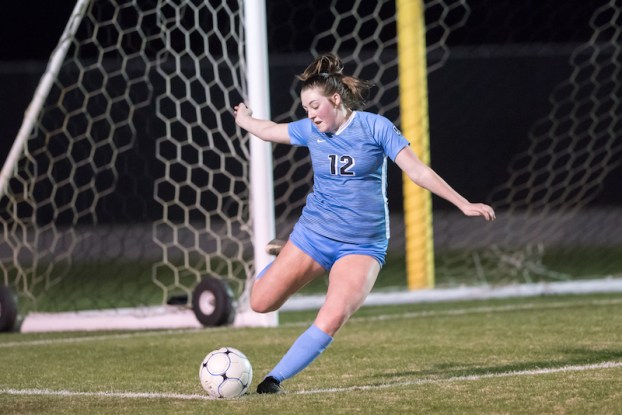 Helena defeated Calera 4-3 on Tuesday, March 19 to pick up its second win against the Eagles this season. (Reporter Photo/Keith McCoy)

CALERA – For the second time this season, the Helena Huskies varsity girls soccer team took down county opponent Calera, this time on the road, edging the Eagles 4-3 on Tuesday, March 19.

Calera struck within the first few minutes of the game off a free kick from a trip just outside the box to make it 1-0.

After falling behind early, Helena responded as senior captain Roby Boatman made a power shot from downfield to tie the game 1-1.

The remainder of the first half would result in two more goals, one for each team, as Taylor Davis scored a goal for Helena to make it 2-1, followed by the Eagles scoring from inside Helena’s box into the top corner to make it 2-2 heading into halftime.

In the second half, Helena was the first to break the tie as Riley Hulsey completed a big pass to herself and speed 1-on-1 to make it 3-2 Huskies.

A few minutes later, Calera responded with a goal over the keeper to tie things up once again, this time 3-3.

The final goal of the game came off a shot from the corner from Davis as it found the back of the net. It would be the decisive goal as the Huskies got the 4-3 win. It was Davis’ second goal of the match.

With the win, Helena improved to 7-3 on the season.

By ALEC ETHEREDGE | Sports Editor Boys Thanks to a hat trick from Corbitt Grundhoefer, the Oak Mountain Eagles were... read more