COLUMBIANA – A 31-year-old Alabaster woman who attempted to run into a Calera Police Department investigator’s vehicle during a high-speed chase in September 2018 will spend the next few years in prison after she recently pleaded guilty to the charge. 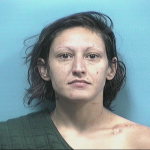 Amber Dawn Galliera, who lists an address on Meadowlark Place in Alabaster, pleaded guilty to one count of attempted assault of a law enforcement officer during a Feb. 28 hearing in front of Circuit Court Judge Daniel Crowson.

Crowson originally sentenced Galliera to 10 years in prison, but split the sentence to two years in prison followed by two years of supervised probation. Galliera received jail credit of 160 days for time already served in the Shelby County Jail.

Through a plea agreement with prosecutors, charges of unlawful possession of a controlled substance, reckless endangerment, fleeing or attempting to elude law enforcement, possession of drug paraphernalia, illegal possession of prescription drugs and driving under the influence were dropped against Galliera.

Galliera’s attempted assault charge came when she led Calera officers on a high-speed chase on Sept. 21, 2018, during which she attempted “several times to run into the vehicle occupied” by a CPD investigator.

By EMILY SPARACINO / Staff Writer MONTEVALLO – Vietnam War veterans were honored for their service in a commemoration ceremony... read more