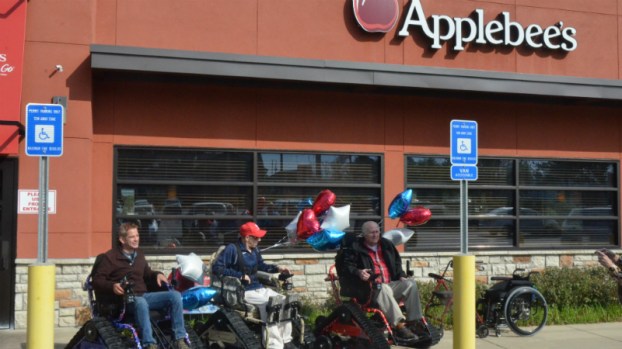 CHELSEA – Three veterans will enjoy regaining their mobility thanks to the efforts of Applebee’s Chelsea and the Support Our Soldiers organization.

Trackchairs were presented to the veterans at the restaurant on Tuesday, March 26, at the conclusion of a fundraising campaign.

Applebee’s and Support Our Soldiers have now donated more than 20 such trackchairs for veterans.

“We’re just proud to be part of it and proud to have Applebee’s as our sponsor,” said Charon Rivers with SOS.

Applebee’s collected funds for the trackchairs beginning in November 2018 by offering brownie bites for $2 each, with all the money going toward the effort.

“And then we have some good people who give just to give,” said Fred Gustin, owner of the Chelsea Applebee’s franchise.

Philip Shadle with Georgia Action Mobility Equipment said the business offers about seven models of trackchairs, which are selected for the veterans based on their needs.

“These chairs allow these heroes to get back out and do the things they love such as hunting, fishing or just a simple ride down the beach—things that so many of us take for granted,” said Christin Barnett with Applebee’s Chelsea.

The veterans who received the trackchairs on March 26 were Matt Burgess of Georgia, Thomas Maneely of South Carolina and Bill Walton of Shelby County.

“You guys are the real heroes of our world,” Gustin said. “We thank you for your service.”