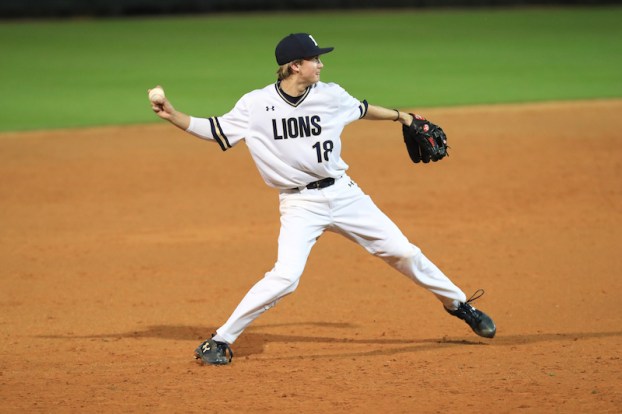 The Briarwood Lions finished area play a perfect 6-0 this season to earn the No. 1 seed out of Class 5A Area 8 heading into the playoffs. (File)

NORTH SHELBY – A few weeks ago, not many people saw this coming. After an 0-12 start to the season, it was easy to write the Briarwood baseball team off, but with a difficult non-area schedule against ranked teams in higher classifications, the Lions still remained the favorite in Class 5A Area 8.

On Wednesday, April 10, the Lions showed why when they swept a two-game series with Woodlawn to win the area championship after finishing area play a perfect 6-0. Not only will Briarwood earn the No. 1 seed out of the area heading into the playoffs—giving them home-field advantage in the first round—but the Lions have now won 10 consecutive games to gain as much confidence as any team heading into the postseason.

Briarwood’s bats have been clicking lately, and that’s what made the difference yet again in a 21-0 victory against the Colonels that led to them finishing area play unbeaten.

The Lions used one run in the top of the first, nine in the second and 11 in the third to pick up a mercy-rule 21-0 victory in a shortened three-inning game.

Briarwood’s first run of the game came on a fielder’s choice from Carson McKinney, which drove in Bryce Perrien for a 1-0 lead through one inning.

That was just the start, however, as the Lions opened up the scoring in the second.

Briarwood used four singles, four walks, a hit batter and some defensive blunders by Woodlawn to score nine runs in the second inning and take a 10-0 lead.

That set up an even more impressive third inning where Briarwood posted 11 runs behind eight singles, four walks, a double and an error to take a 21-0 lead and end the game in three innings of play.

Briarwood was led by Christian Ferguson with a 2-for-2 game featuring five RBIs, two runs scored and two walks. Wesley Helms and Andrew Jones each went 1-for-1 with two RBIs, while Eli Steadman went 2-for-2 with an RBI and two runs scored.

Guin Renfroe picked up the win on the mound not allowing a hit and striking out seven in his three innings.

By SETH HAGAN | For the Reporter CHELSEA – It was a fight to the finish in Chelsea on Wednesday,... read more