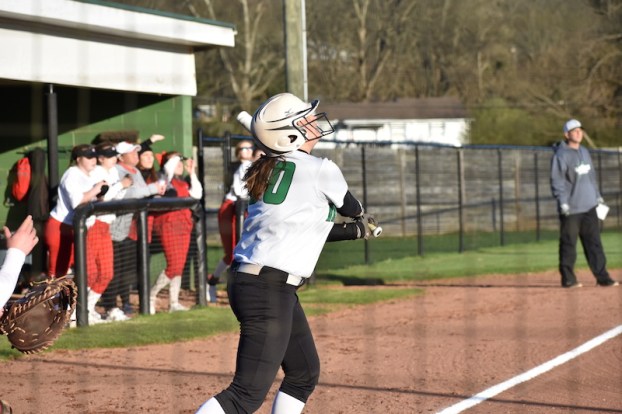 The Montevallo Bulldogs fell to Leeds on Wednesday, April 10, in a matchup that clinched the regular-season area title for the Greenwave. (Contributed)

MONTEVALLO – The Leeds Greenwave softball team has been rolling throughout the 2019 season, and brought a seven game winning streak into their area matchup with Montevallo on Wednesday, April 10.

Not only have the Greenwave won seven in a row, including a win against the Bulldogs back on March 12 by a final of 11-1, but they had won 13 of their last 14 games with their lone loss coming by one run in a 5-4 loss to Pleasant Valley.

That made it a tough matchup for Montevallo on Wednesday, with Leeds bringing as much momentum into the contest as any team the Bulldogs had played this year, and it showed on the field.

Leeds used a consistent effort, scoring runs in the first three innings to quickly take a 4-0 lead, while then pulling away with four runs in the top of the sixth to pull off an 8-1 victory to improve to 6-0 in area play this season.

It was a big win for the Greenwave, because in area play, Montevallo hasn’t been playing bad and is currently the second-place team, but with the victory, Leeds clinched the regular-season area title and will host the area tournament.

To this point, the Bulldogs have beaten Childersburg twice, Oak Grove once and Indian Springs once, and look to have a solid chance to be one of the two teams to advance out of the area and into the playoffs.

Leeds started the scoring in the top of the first on an RBI double from Taylor Clough to take the early 1-0 advantage.

It didn’t take long for the Greenwave to add to that lead in the second inning after a double from Maddie Anthony was followed by an RBI groundout from Briana McLaughlin to extend the margin to 2-0.

The streak of consecutive innings with runs continued into the third for Leeds when an RBI single from Abby Thomas and a sac fly from Brooke Haynes put the Greenwave on top 4-0.

Montevallo finally found an answer in the bottom of the fourth, but the damage was limited due to a double play and a successful pick-off attempt.

During that pick-off attempt, however, Avery Lawley was able to cross the plate for the Bulldogs to make it a 4-1 game.

That ended up being the only run of the game for Montevallo, and in the top of the sixth, Leeds closed the game out with a four-run inning.

The impressive inning saw the Greenwave string together two singles, a triple and another single to drive in all four of the runs to close out the 8-1 victory.

Montevallo saw six players pick up a hit, but no RBIs were recorded.

Thomas got the win in the circle for the Greenwave after tossing a complete game one-hitter featuring three strikeouts.

By ALEC ETHEREDGE | Sports Editor HOOVER – After falling behind 2-1 in the top of the sixth, the Spain... read more