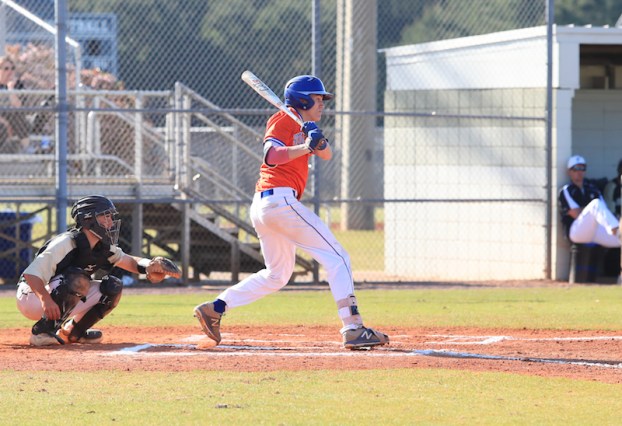 Montevallo swept the Leeds Greenwave with two thrilling wins in the final inning to earn a spot in the 2019 postseason. (For the Reporter/Dawn Harrison)

With a postseason spot on the line in back-to-back games against the Leeds Greenwave on Wednesday, April 10, and Thursday, April 10, the nerves were there for the Montevallo Bulldogs, but it didn’t show.

Tied in the seventh in the first game of the area series, the Bulldogs scored a final-inning run to pick up a walk-off victory, and then a night later, they followed that thriller up with an extra-inning victory thanks to scoring two runs in the top of the eighth for a 7-5 victory.

Great teams are made for clutch situations, and Montevallo proved it wasn’t going to shy away from the big moment, and instead the Bulldogs determined they’d do whatever it took to continue their season into the playoffs.

And that they did. With the two thrilling victories, the Bulldogs moved to 6-2 overall in the area and 17-10 overall to finish second behind Oak Grove in the final area standings to cement a spot in the 2019 Class 4A playoffs.

A recap from each of the electrifying wins is below.

The walk-off win in game one went much deeper than Cody Posey’s RBI single to close the game, as the Bulldogs were forced to overcome a four-run deficit earlier in the game.

In the fourth, Leeds led the inning off with three singles, and eventually scored all three runs due to mistakes by the Bulldogs with two walks and an error.

Montevallo quickly found itself in a tough spot thanks to a 4-0 deficit in the biggest game of the year.

But the Bulldogs never panicked.

Instead, they let the big moment fuel them. Right after the Greenwave took the four-run lead, Montevallo’s offense jolted like a strike of lightning.

Posey and Grant Cordes led the bottom half of the fourth off with back-to-back doubles to quickly put two runners in scoring position with no outs.

After one out was recorded, Robbie Gallagher hit a grounder to the pitcher, but an error on the throw to first got far enough away to allow both base runners to cross the plate and cut the deficit in half.

That resurgence of confidence also carried over to the defense as Josh Mims and the defense behind him got the Greenwave to go down in order in the top of the fifth.

The anticipation to get back to the plate probably had something to do with that confidence defensively, as the Bulldogs came back ready to make some more noise.

A leadoff walk, a hit batter and a single from Malik Inabinette loaded the bases with no outs.

Posey then stepped to the plate, and while he popped out and the Greenwave eventually threw out Mims advancing to third for a double play, he not only drove in run, but was able to move Inabinette into scoring position.

That became key a batter later, as Cordes hit an RBI single that allowed Inabinette to score with ease to tie the game due to his speed.

The two teams combined to put three runners aboard in the sixth, but no runners crossed the plate.

Then, after three consecutive strikeouts from Mims on the mound, Montevallo came back to the plate in the bottom of the seventh looking for the win.

A leadoff single from Mims got the threat started.

Following a pop out, with Mims on second following an error, Posey stepped to the plate and ripped the third pitch he saw in a 1-2 count to right field.

The ball found the grass and allowed Mims to round home with the right fielder trying to nail him at the plate. Mims, however, beat out the throw and the Bulldogs took game one of the series in walk-off fashion.

Mims went 3-for-3 in the game and scored the game-winning run, while Posey went 2-for-3 with two RBIs. Cordes also went 2-for-3 and added an RBI. Gallagher had one hit and posted two RBIs, while Inabinette went 1-for-4.

On the mound, Mims gave up those four early runs, only one of which was earned, but rebounded to strike out 11 batters and allowed just five hits to pick up the complete-game win.

This time, Montevallo had to deal with giving up the lead. After gathering a 4-1 lead through five innings and 5-3 lead through the top of the seventh, the Bulldogs gave up two runs in the home half of the final inning to allow Leeds to tie the game at 5-5 and force extra innings.

With the season on the line for the Greenwave, they did exactly what they had to do to fight for the win. Down 4-1 with two innings to play, Leeds could have folded up shop, but instead scored four combined runs in the sixth and seventh to even the score.

With all that fight, however, the ending became even more heartbreaking for the Greenwave.

In the top of the eighth, Montevallo stepped to the plate and in similar fashion to the first game got clutch hits early in the inning.

Mims and Blaine Carstensen hit back-to-back singles, which eventually put runners on the corners with no outs.

Cartensen then stole second before a sac fly from none other than Posey put Montevallo ahead by a run in the clutch again.

With Carstensen now at third after the sac fly, a walk put Cordes on first with one out.

Then, an error on a ground ball from Clay Colley allowed Carstensen to cross the plate for an added insurance run and a 7-5 advantage heading to the bottom of the eighth.

Leeds was able to threaten in the home half of the inning with its season again on the line.

The Greenwave got two singles in the first three at bats to put two baserunners aboard with one out.

Cordes, however, already had two strikeouts on the mound in his brief time out there, and then added to that total by punching out the final two batters in a big spot to seal the Bulldogs’ playoff fate with a thrilling 7-5 victory.

Jay Dreyer got the start on the mound and allowed five runs, two of which were earned, and six hits while striking out six. Cordes pitched the final 1 2/3 innings and struck out four of the nine batters he faced.