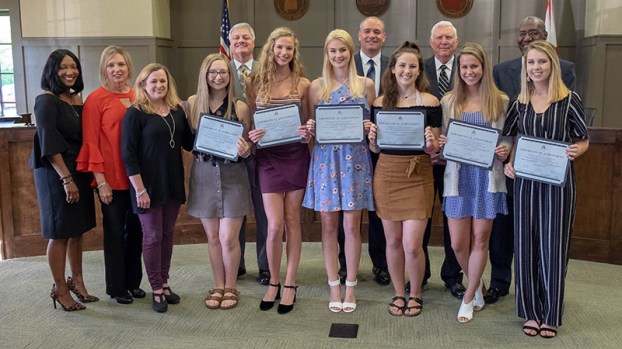 Thompson High School majorettes are honored by Alabaster Board of Education members during an April 8 meeting. (Reporter Photo/Neal Wagner)

ALABASTER – The meeting room at Alabaster City Hall was filled to the brim on the evening of April 8, as the Alabaster Board of Education honored several Thompson High School teams for wrapping up successful seasons.

Among those honored was the THS majorette team, which is coming off a season during which they added plenty of hardware to the school’s trophy case.

During the 2019 competition season, the majorettes, who are sponsored by Zandra Morris, placed first in the auxiliary category at the American All-Stars Southeastern regional competition.

At the Twirltacular Mardi Gras competition, the team placed first in the School Majorettes category.

The THS majorettes recognized during the meeting were:

By NEAL WAGNER / Managing Editor ALABASTER – The Alabaster Board of Education shined the spotlight on a successful Thompson... read more