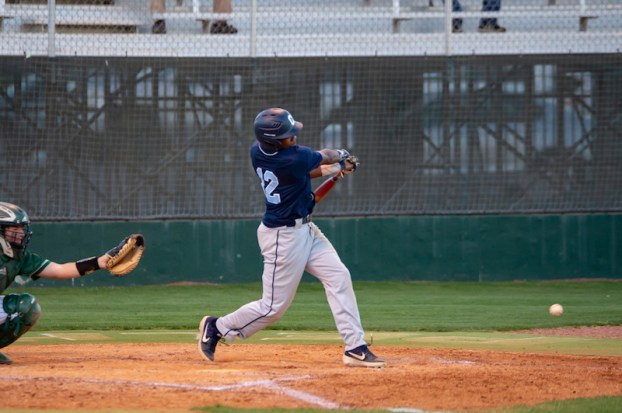 The Calera Eagles closed out their season with an 8-0 shutout performance thanks to strong pitching and patience at the plate. (For the Reporter/Larry Dancy)

CLANTON – The 2019 baseball season marked Calera’s first in the 6A classification, and while it didn’t go the way the Eagles had hoped, they ended on a high note with an 8-0 shutout over Chilton County on Monday, April 11.

The Eagles scored runs in the third, fourth, sixth and seventh innings, while allowing just two hits to complete the shutout effort on the road.

Following a quiet two innings to kick off the game, Calera struck first with five combined runs over the next two innings.

A walk to Matthew Bullard and a single from Alijah Franklin put two aboard with one out. After a second out was recorded, Graham Blankenship lined an RBI single to right field that drove in Franklin for a 1-0 lead.

An inning later, the Eagles took that slim lead and added to it with a strong inning at the plate.

A big reason for the four runs they scored in the inning was five walks from the Chilton County pitching staff.

While the Tigers were able to put two outs on the board following back-to-back walks, a third walk during the next at bat loaded the bases before back-to-back singles from Riley Gay and Blankenship drove in a total of three runs to extend the lead to 4-0.

That was followed with two more walks, the last of which to Quindarius Crews drove in the fifth and final run of the inning.

Calera continued to be patient at the plate, and in the top of the sixth, the Eagles added two more runs thanks to four more walks and an error. The last two of the four walks in the inning drove in both runs for a 7-0 advantage.

The Eagles then closed out the scoring in the top of the seventh when Crews hit an RBI single to right field to drive in Gay, who had doubled earlier in the inning, to create the final score of 8-0.

Blankenship went 3-for-5 with three RBIs and a run scored to lead Calera in the win. Crews added a 1-for-4 game with two RBIs, while Gay went 2-for-5 with one RBI and two runs scored. The Eagles totaled 13 walks in the game.

Jaxon Butterworth got the complete-game shutout in 115 pitches allowing two hits and two walks while striking out 11.

By ALEC ETHEREDGE | Sports Editor MONTEVALLO – While the Shelby County Wildcats narrowly missed out on a spot in... read more