“I joined the military because I wanted to make a difference,” 70-year-old Mel Shinholster said. “I didn’t have a college degree, but didn’t need one to fly a helicopter.”

As a helicopter pilot in the Vietnam War, he flew the UH-1 Huey helicopter with the 23rd Infantry Division (Americal Division).

By the end of his tour he had flown a total of 987 combat hours earning an Air Medal with clusters and the Army Commendation Medal for sustained flights in hostile territory. 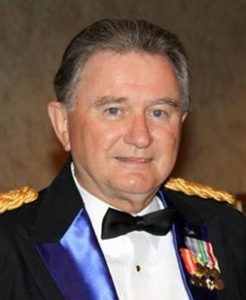 Mel Shinholster served as a helicopter pilot in the Vietnam War and now dedicates his time to veteran and military activities. (Contributed)

Following an honorable discharge from the Army in 1970, Shinholster enjoyed a 35-year career at BellSouth, where he worked as a project manager and project developer. He retired in 2002.

Shinholster has been married to his wife, Ann, for 49 years. The couple have one daughter and one son. Mel chuckles about Ann’s career as “a professional grandmother” to their three grandchildren.

He holds a B.A. in history with a concentration in Middle Eastern and Asian history from UAB.

When asked if he had any hobbies he enjoyed or any particular interests, he said, “I don’t have any hobbies. My attention goes to veteran and military activities.”

As president and board member, Mel devotes nearly 100 percent of his time to Blue Star Salute Foundation, Inc.

Spending much of his time on the road within Alabama, he estimates his travels take him about 12,000 miles each year.

Mel was honored at the Flight Reunion held at American Village in Montevallo in August 2015.

Other awards include First Distinguished Citizen Medal in Alabama by the Daughters of the American Revolution in 2014, the Colonel Leo Thorsness Veterans Award for his service to veterans in 2014, U.S. Army Combat Pilot, CW2 (retired), Americal Division Association (23rd Infantry Division), Vietnam, 1968-1969, “God’s Own Lunatics.”

By DAISY WASHINGTON / Community Columnist When asked about his hobbies and any special interest he has, Don Greene replied,... read more