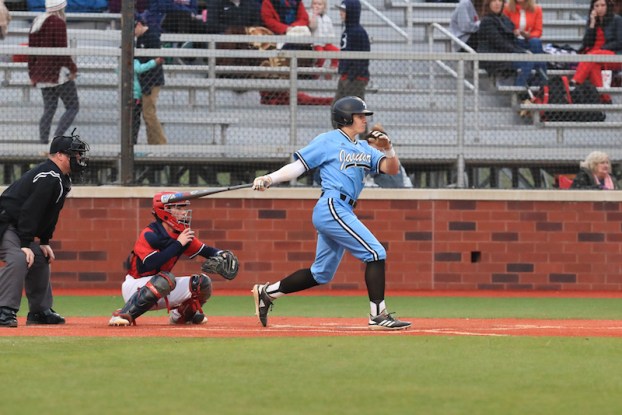 The Spain Park Jaguars closed the 2019 season with a 2-1 victory against the Vestavia Hills Rebels on Wednesday, April 17. (For the Reporter/Dawn Harrison)

Spain Park closes season with win at No. 3 Vestavia Hills

VESTAVIA – Being in Class 7A Area 6 was always going to feature two well-deserving playoff teams that will compete for a state championship this season with Hewitt-Trussville, Mountain Brook, Spain Park and Vestavia Hills all spending time inside the top 10 of the standings this season.

And while the Spain Park Jaguars, along with the Mountain Brook Spartans, will be on the outside looking in, they also closed the season with a huge win against the No. 3 Rebels, showing they too are one of the state’s best teams despite missing out on the postseason.

The Jags got an unbelievable complete-game victory from Linden Samaha allowing just four hits and striking out four batters to lead his team to a 2-1 victory in their finale.

The win came a night after Spain Park had lost to Vestavia on a walk-off single in the bottom of the eighth inning—a game the Jags led 3-2 through the top half of the sixth.

But the Jaguars didn’t hang their heads on the loss, knowing they still had one chance to pick up a win and send the seniors off with a big victory, and that’s just what the hard-fighting bunch did.

Spain Park showed that fight early in the game too, striking in the home half of the first inning with the game’s first run on an RBI single from Lane Willis. He drove in Colton Ledbetter who doubled to lead off the inning.

In a low-scoring game, Vestavia Hills struck next in the fourth inning when the Rebels put a run on the board off a ground out that eventually ended the inning.

The Jags, however, had a quick answer in the bottom half of the inning thanks to a walk and single from Jack Poist and Adamy Wygle, respectively. An error during the next at bat actually allowed Poist to come home and score the game-winning run.

Vestavia Hills only got three baserunners the rest of the game, as Spain Park held on for the 2-1 victory.

The Jaguars were led by Willis, who went 2-for-2 with an RBI at the plate. Ledbetter, Carter Sidor and Wygle had the other hits.

Spain Park finished the season 20-14 overall and 1-5 in area play, but two of those five losses were by one run, while three of them were by three runs or less.

By ALEC ETHEREDGE | Sports Editor TUSCALOOSA – Coming into Wednesday, April 17, the Oak Mountain Eagles were the only baseball... read more