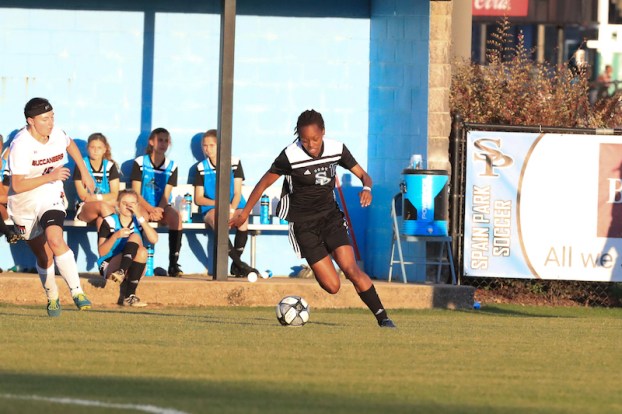 The Spain Park girls soccer team picked up a 5-0 win over Hewitt-Trussville on Tuesday, April 16, to complete the season sweep with two shutouts. (For the Reporter/Dawn Harrison)

Spain Park girls grab area win, one away from postseason

TRUSSVILLE – For the second time this season, the No. 4 Spain Park girls’ soccer team shutout Hewitt-Trussville to complete the season sweep on Tuesday, April 16, and improve to 12-4 overall.

More importantly than the overall record is that with the win, the Jaguars improved to 3-2 in area play. With No. 1 Vestavia Hills already having locked up the regular-season area crown, the battle for the second playoff spot out of the area is on the line between Spain Park and Mountain Brook, as the two will square off against one another on Tuesday, April 23.

But for the time being, this win over the Huskies kept the Jags in the driver’s seat for that spot having already beaten the Spartans 2-0 earlier in the season.

Spain Park was yet again led by Jasmine Greene, who has been one of the best players in the state this year, as she recorded another hat trick with five of the Jags’ five goals in the shutout effort.

She scored two of Spain Park’s first three goals and then added the hat-trick goal in the second half of the game off an assist from Hannah Horton, which put the Jags on top 4-0.

That was then followed by a big goal from a young up-and-coming star for the Jags in eighth grader Marybeth O’Bryant. With close to 10 minutes left in the game, she was able to find space to take a shot and fired the ball directly into the back of the net to close out the 5-0 effort.

It was a big win for Spain Park, who had tied with James Clemens in its previous game and lost to Mill Creek (GA) and Vestavia in the two games before that.

Having won six games before that rough three-game stretch, the Jaguars are back on the right path with confidence heading into that matchup with the Spartans, where a loss by one goal would still put them in the playoffs.

All of Spain Park’s losses this season are to ranked teams in the state and against a ranked team from Georgia.

By SETH HAGAN | Special to the Reporter  HOMEWOOD – The No. 1 Briarwood Lions took a rough, back-and-forth top-three... read more