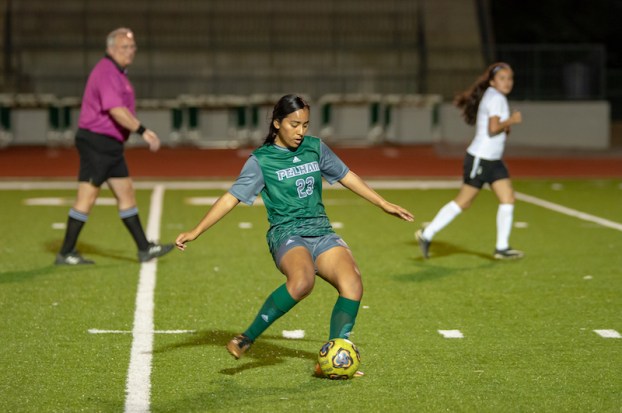 Pelham’s girls soccer team clinched a playoff berth for the second year in a row on Thursday, April 18, behind a dominant 8-0 shutout against the Helena Huskies. (For the Reporter/Larry Dancy)

PELHAM – The 2018 soccer season marked a turnaround year for the Pelham Panthers’ girls team under the direction of head coach Brittany Pollard thanks to their first playoff appearance in six years.

Now, following an 8-0 shutout victory of the Helena Huskies on Thursday, April 19, the Panthers are headed back to the playoffs for the second year in a row.

While last year’s 17-4-1 overall record and 2-2 area record marked a breakout season, what the Panthers have done as a team to follow that up this season has been almost more inspiring.

Having lost just two times, both to No. 1 Chelsea, the Panthers are currently 15-2 overall and finished area play 2-2 with wins over Helena by a combined score of 11-1.

Pelham has been strong on both sides of the ball this season scoring three or more goals in 14 of its 17 games thus far, while posting 12 shutouts as well.

Against their area finale against Helena, the Panthers put all of that on full display in a dominant 8-0 shutout.

The scoring started when freshman Morgan Synder played a ball through to Michelle Hernandez, who found the space to put the first goal on the board for a 1-0 lead.

The majority of the first half was quiet, however, and it wasn’t until five minutes left in the first half that the next opportunity became available to the Panthers.

This time Jenny Aguilar was able to find Hernandez streaming up field again, which led to the junior burying her second goal of the game into the back of the net for a 2-0 halftime advantage.

Pelham saw something on those two first-half goals that gave the team confidence to take chances offensively in the second half as the Panthers came out on fire.

Two minutes into the half, a great pass from Chanel Hernandez to Michelle Hernandez ended in the junior’s third goal of the game. Once she got the ball, Michelle Hernandez made a move to get around the goalkeeper and put her hat-trick goal in the back of the net for a 3-0 Pelham lead.

Just a few minutes later, a cross from Korin Ingram ended with senior Lilli Nkinda heading the fourth goal into the net for the Panthers, which marked Nkinda’s first goal this season.

After that special goal, Pelham got back to the offensive attack 12 minutes later when Chanel Hernandez rocketed a shot from more than 30 yards away to put Pelham up 5-0 in the late going.

The Panthers, however, still weren’t done. It took less than two minutes for them to add to their lead when freshman Maggie Lopez added to the lead.

It didn’t take long after that goal from Aguilar to add her second goal of the game off a nice assist from Michelle Hernandez.

Now up 7-0, Lopez went on to close the scoring by posting her second goal of the night for the 8-0 victory.

Pelham will close out the regular season on Monday, April 22, at home against Pinson Valley.

By ALEC ETHEREDGE | Sports Editor CALERA – It hasn’t been the season Calera’s softball team hoped for, but on... read more