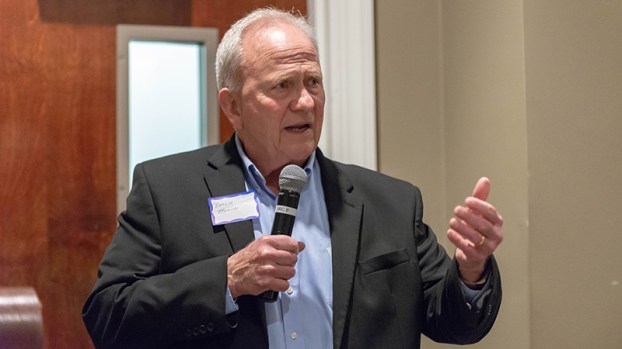 Butch Ellis, the first president of the Leadership Shelby County Board of Directors, speaks during an April 23 event celebrating the organization’s 25th anniversary at the Pelham Civic Complex. (Reporter Photo/Neal Wagner)

PELHAM – One of the most successful leadership development entities in the state didn’t have a genesis during one of the best times in Shelby County’s history.

Coming on the heels of a near-bankruptcy for the county in 1992 – which would have been the first county Chapter 9 bankruptcy in the southeastern United States – county leaders used what they learned while navigating those rough waters to tap into the leadership potential spread throughout the county.

“When we came to the end of the 1980s, we were at that point rotating through a very bad time in Shelby County. We were the wealthiest county in the state, we had the highest median price of housing and the highest income and lowest unemployment, but the county itself was in dire financial trouble. We were literally bankrupt,” said Butch Ellis, the current county attorney and first president of the Leadership Shelby County Board of Directors. “The county had borrowed every dime it could borrow. We had no more borrowing capacity left under the Constitution. We had made some miscalculations on a sewer system, and there were some other things that we had done. We could not even pay the interest on the indebtedness from the sewer. In the spring of 1992, we were declared in default of the bond.”

Things were looking bad for the about 100,000-resident county, and its leaders had already drawn up the bankruptcy paperwork. But before the bankruptcy could be finalized, a largely new Shelby County Commission turned to what they believed was their greatest asset: The county’s citizens.

“We had a Commission that very early on realized that we had to involve the citizens of this county. If we wanted to solve the problems, we had to involve the citizens. They appointed a committee of 19 private citizens, and their assignment and job was to analyze the problems that we were facing and come up with a solution,” Ellis said. “We realized at that time that we all have a stake in this county. If the county was going to prosper and realize its potential, we had to tap into that community leadership we had and needed to develop.”

Thankfully, the county was able to get back on its feet financially – largely because of the efforts of the committee of county residents. This served as the foundation for LSC, which was founded in 1994.

Every year since it was founded, LSC has served a class of Shelby County residents and business owners who have the potential to be leaders in their communities. During their yearlong tenure as students in the program, participants learn about many aspects of the county, and also work with their classmates to complete projects aimed at strengthening Shelby County.

In the past, project groups have created everything from Shelby County Mental Health Court to support groups for local nonprofit organizations.

Since its founding, LSC has also developed a youth leadership program mirroring the adult program, and awards a few collegiate scholarships each year to Youth Leadership graduates.

Today, LSC has hundreds of adult and youth alumni, and has made a significant impact on every community in Shelby County.

On April 23, every LSC alumni was invited to the Pelham Civic Complex and Ice Arena to celebrate the program’s quarter-century anniversary, its founders and the people who have helped make it successful over the years, such as its first director Ellen Corbett and current director Carol Bruser.

“We have been very fortunate to have only had two directors in the last 25 years, and to have Ellen train Carol,” said former state Rep. Mike Hill, who has been involved with the program for many years. “We’ve done Shelby County proud, and I hope we continue to do so.”

LSC has met its initial goal of getting citizen leaders involved in the county’s success, and has evolved into one of the top programs of its kind in Alabama.

“Boards across this county, be it elected or nonprofit or even substantial businesses in the county, do you know that every one of them has, if not one, then three, four, five or six people who have been through this program?” said longtime Shelby County Commissioner Lindsey Allison. “Something worked, didn’t it?”

PELHAM – Registration is now open for Pelham’s 2019 Youth Football and Cheer season for kids in first through sixth... read more