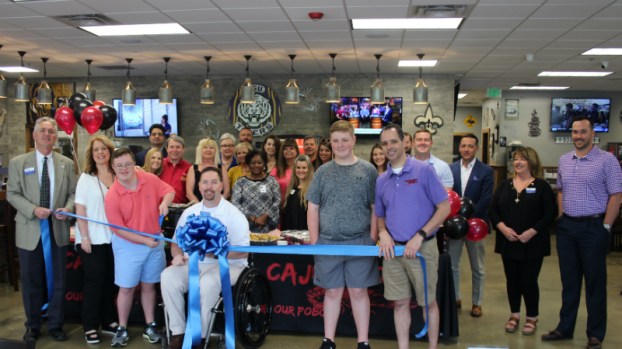 CHELSEA – Though patrons have been enjoying the food at the new Cajun Boys & Our Poboys location in Chelsea for several weeks, an official ribbon cutting ceremony was held on Thursday, April 25.

Owners Jack Donovan and Scott Marshall welcomed those in attendance at the event, which was sponsored by the Chelsea Business Alliance.

“We’ve been a Chelsea family for many, many years,” Donovan said. “We are very excited to be in the city of Chelsea.”

“I recognize many of you from eating here, so that’s good,” Marshall added.

Chelsea Mayor Tony Picklesimer recalled the owner of the building off Chesser Crane Road calling him looking for a tenant after Chelsea Baptist Church moved. Soon after, Donovan called looking for a location for a new restaurant.

“We are so happy to have you here,” Picklesimer said and added that the restaurant staff has been welcoming to him and his family during their visits. “That’s not special treatment; that’s just what everybody gets.”

A soft opening of Cajun Boys & Our Poboys was held on March 5.

The Donovans also own the Cajun Boys & Our Poboys Pelham location, Donovan Builders LLC and the Johnny Rays Corporation.

At the new location, patrons will see menu items such as shrimp po boys, hot roast beef po boys, boudin balls, oysters (fried or chargrilled) and crawfish (available in season), and enjoy the offerings at a full open bar.

The poboys are served on Gambino’s French bread.

Non-seafood items and options for children are also available.

For more information, visit CajunBoysandOurPoboys.com and the restaurant’s Facebook page.

By NEAL WAGNER / Managing Editor While not the top in the state, Shelby County ranked high for the amount... read more