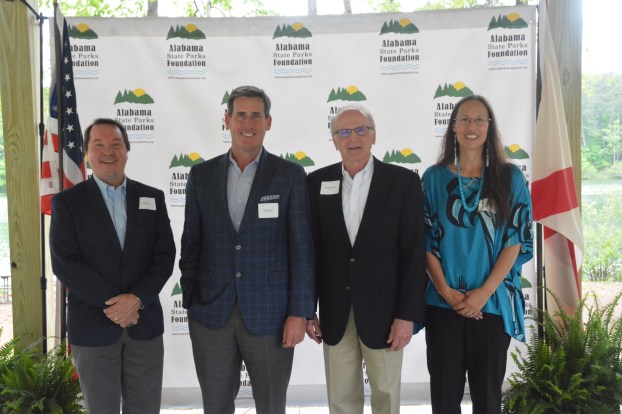 PELHAM – The formation of a philanthropic foundation to help Alabama State Parks was announced at press conference held at Oak Mountain State Park on Thursday, May 25.

He has served in leadership roles for university foundations at LSU, Western Illinois, Purdue and North Alabama. He also served as the president of Audubon chapters in Lexington and Louisville, Kentucky.

Hendricks said he’s passionate about the state’s parks because they offer a chance for people to leave the stresses of modern life and gives them time to pause and appreciate nature.

Over the past two years, Hendricks has worked to form a 15-person board of directors, all of whom are volunteering their time toward the cause. Alabama State Parks Director Greg Lein, who serves as treasurer for the board, said he was enthusiastic about the prospects for the new organization.

“This will help engage corporate Alabama and rally the community,” Lein said. “It’s the ally the parks system needs because it can’t do some things itself because it’s a government entity. The Foundation will be the driver for attracting supporters who want to contribute for specific parks and projects that benefit the whole system. Dan is the perfect guy to take on this challenge.”

The Foundation also unveiled its First Friends program and its website, Asparksfoundation.org.

“Our First Friends initiative intends to build a network of supporters who are excited about getting in on the ground floor of this endeavor,” Hendricks said. “First Friends who give to the Foundation will forever be recognized as Founding Members of the Alabama State Parks Foundation. Like our founding board of directors, our First Friends are people who are dedicated to building and sustaining a great statewide park system.”

Dr. Yvette Running Horse Collin, a founding board member of the foundation, said this opportunity allows her to show Alabama her appreciation for the many gifts she has bestowed upon all citizens.

Corporate partners are also supporters of the Foundation. Buffalo Rock President and Chief Operating Officer Matthew Dent called the Foundation a perfect opportunity for businesses and industries in the state to show their pride in being part of their communities.

“The parks couldn’t function without all of the volunteers who help on a daily basis, and they need resources to be able to do what they need to do,” Dent said. “Buffalo Rock is happy to be a part of this new organization because we know how important the state parks are to our customers and employees as well as all of Alabama’s citizens. Outdoor entertainment goes hand-in-hand with enjoying our products and I can think of no better place to get that feeling of refreshment than an Alabama state park.

Every person counted: Shelby County gets ready for 2020 Census

PELHAM – A team of local leaders gathered at the Shelby County Services building on Tuesday, April 23, to discuss... read more