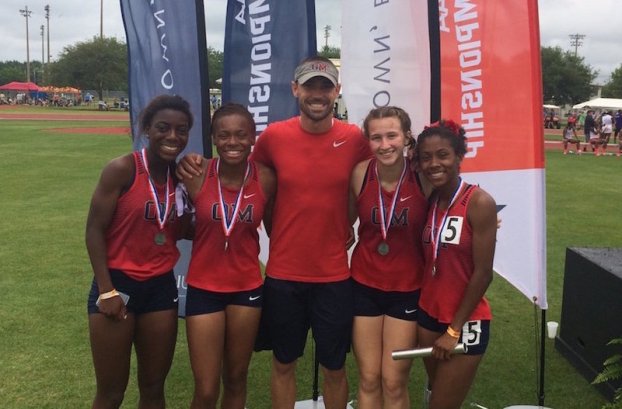 GULF SHORES – With all three teams posting top 10 finishes in both the boys and girls standings at the 2019 AHSAA Outdoor State Track and Field Championship, Oak Mountain, Spain Park and Thompson all left their mark on a special event.

Oak Mountain’s five state champions at the event was the highlight of the meet for local teams, and Nicole Payne was the brightest star of them all.

The senior went on to claim three state championships, winning the 100-meter dash, the 200-meter dash and 400-meter dash. After winning those three events on Saturday, May 4, she immediately left to attend Oak Mountain’s girls soccer quarterfinal matchup with Vestavia Hills, and while the Eagles lost 1-0 in double overtime, it showed her athletic prowess as a key contributor on two different teams.

She was joined by teammates Harrison Dimick and Trey Allen with state championships as well.

Dimick, who finished second in the shot put, claimed the title in the discus throw with a distance of 181 feet, 3 inches. That also set a new state record as he bested the 178 feet, 0.5 inch mark set by Thompson’s Viktor Turek.

Allen also had an impressive showing in his state-championship victory. In the high jump, he cleared a height of 6 feet, 8 inches, and attempted to set the state record of 6 feet, 10.25 inches, but came up just short of that mark.

Other podium finishes for the Eagles included Aaron brooks and the 4X400-meter relay team. Brooks finished third in the 100-meter dash with a time of 10.83 seconds, while the relay team finished second with a time of 4:00.17.

Steven Pate had a strong showing as well with his finish of third in the discus throw thanks to a distance of 157 feet, 5 inches.

Teammate Josh Wallace also grabbed a third-place finish in the javelin throw with a distance of 186 feet, 9 inches.

For the girls, Sydney Taylor closed out a strong meet for the Jaguars with her finish of third in the 100-meter dash. She finished the event in 12.08 seconds.

Kameron McDaniel also had an impressive showing for the Jags, as he finished fifth in the 100-meter dash and eighth in the 200-meter dash. In the prelims of both, he finished second and third, respectively.

While Thompson didn’t end the season with any individual state championships or a team title, the Warriors were close in so many events and with the most athletes from any school in the county qualifying for the event, they also had the most podium finishes of any team from the county, while also placing several athletes in the top five.

Jace Jones claimed fourth in both the 3,200-meter run and 1,600-meter run, while Sam Reynolds finished fourth in the 100-meter dash. Also in the top five were Steve Villegas with a finish of fifth in the shot put and London Wooley in the 300 meter hurdles.

There were several, however, that did crack the top three to finish on the podium.

The girls’ impressive fifth-place finish in the team standings was highlighted by seven podium finishes.

McKenzie Hogue closed out her Thompson career with three of those podium finishes, claiming second in both the 1,600-meter and 3,200-meter races, and third in the 800-meter run.

Zoria Miller and Niya Oden added the other three podium finishes for the Warriors with Miller claiming two of the three.

Miller’s strong meet was highlighted by third place finishes in the discus throw and shot put. In the discus, she posted a total of 114 feet, 11 inches, and in the shot put, she posted a distance of 40 feet, 0.75 inches.

Oden’s finish of second in the triple jump was thanks to a distance of 38 feet, 2.25 inches, which ended up setting a new school record in the event.

By ALEC ETHEREDGE | Sports Editor  ALABASTER – More chapters continue to be written to a historic season for the... read more