Shakespeare with twist. That’s what the students in theater department at Shelby County High School offered locals during the recent run of “A Midsummer Night’s Dream ’80’s Style.”

This play had all the language and comedy of true Shakespeare with the fashion and music of the actor’s parents.

It was a delight for audiences of all ages. Children as young as 8 were laughing with full understanding of Shakespeare. 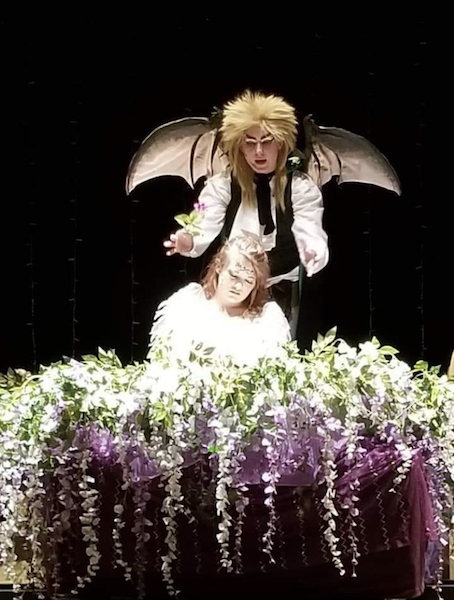 The brilliant scenes that this young troop of actors adapted themselves to the ’80s setting included the music of Mario Brothers for sword fights, and the Southfork ranch replaced the original setting of ancient Greece.

Theater coach and teacher Kathryn Myrick leads this group of 35 student actors and tech crew, encouraging them to bring their own creativity to the stage.

Under her direction, the script was reworked by the students themselves and the entire production was produced by them as well. The result was brilliant.

Myrick has this to say about working with the theater students: “Every time I direct a show, I look forward to helping students develop their artistic performance by way of creating a character for the stage and/or developing a technical skill. However, even more rewarding, is watching the kids bond and develop friendships with one another, regardless of their grade level and social standing with our school.

“I often think that if everyone could participate in a play, and learn the value of teamwork and acceptance the way this cast has, our world would have fewer issues with hatred and intolerance towards one another.”
For this reason, the work of these students serves for more than just creativity. They have taken on a mission.

Funds from the show and the sale of stage props are being pulled together for the much-needed replacement of the stage floor.

The stage in the Wildcat theater was last resurfaced in 2000. The floor itself hasn’t been replaced since the early 1980s.

The current state of the stage has made it impossible to execute certain prop and scene projects for various productions.

Stage scenery has to be built to scale so that it will stand straight on the warped floor, and this can be a feat for the young tech crew.

This will be an ongoing goodwill project for the students, and one that will benefit not only the theater class, but the entire community.

To reach their goal they need the help of the community that the stage serves.

The estimated cost to renovate the stage is about $15,000. A portion of tickets sales from last week’s play and the most recent Common Threads Stories event will be put toward this project, but the students are also looking for sponsors from the area to contribute to the fund.

By SASHA JOHNS / Community Columnist If you haven’t been to the monthly Shelby Iron Works pancake breakfast, and you... read more