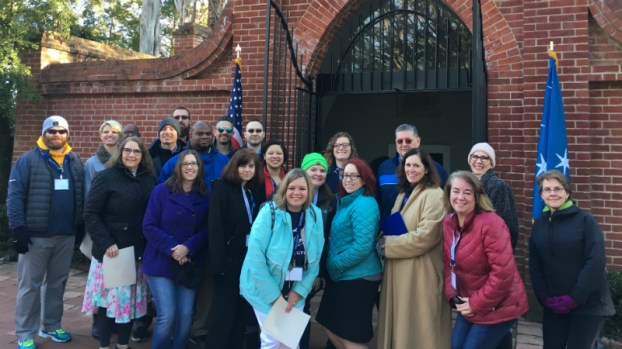 Teacher gets glimpse into life of first president (community column)

George Washington…his picture is on the dollar bill, he was the first president of the United States and a great leader. Knowledge of this great man has waned over time, and thanks to debit cards his picture is now often found wadded up in a pocket or in the bottom of the washing machine.

Few people continue to have the love for and the interest in the study of George Washington, the man.

Meet Dawn Howard, teacher at Vincent Middle High School, who among other subjects, teaches 10th and 11th grade AP US History, which includes the 18th Century and George Washington, the president. Her affection for the history of 18th Century made her award of a fellowship at The George Washington Teacher Institute extra special.

“I’m so blessed to have received this fellowship, and I encourage other teachers to apply,” said Howard.

The George Washington Teacher Institute Spring Residential Program is a four-day immersive professional development experience designed to support K-12 educators who teach about the life, leadership and legacy of George Washington and the 18th-century world in which he lived.

The application process for this fellowship is quite rigorous and includes submittals of a resume, letters of recommendation and essays. From the large pool of nation-wide applicants, 21 are chosen to participate in engaging classes while also meeting scholars, musicians and historical interpreters from the George Washington and Mount Vernon Society.

“We had an all access pass to tour Mount Vernon and the farm,” Howard said about the trip. “We spent time in the museums and in the mansion, we even had the privilege of laying a wreath at Washington’s tomb and the tomb that remembers the enslaved people at Mount Vernon.”

“All access” apparently affords special privileges. “Our last day started at 4:30 a.m. I was able to sit on Washington’s piazza at Mount Vernon and watch the sunrise over the Potomac. It was breathtaking and a memory I will forever cherish,” said Howard.

“I was thrilled for Ms. Howard,” said Principal Dr. Michele Edwards. “Hands-on learning experiences are critical to professional development and add to the strength of our faculty. Ms. Howard is as passionate about learning as teaching.”

“Yes, I am passionate about history and thought I knew a lot about George Washington before this trip,” said Howard. The Spring Residential Program theme was The Great Experiment: George Washington and the Founding of the U.S. Government.

“Administratively, I recognize the value to our students; Ms. Howard’s experiences will be passed on in the classroom,” said Edwards.

With heartfelt expression, Howard said, “There is something about being in someone’s home that gives you a true glimpse into their lives. The best part was learning about George Washington, the man.”

By Kathy Copeland / Vincent Community Columnist Olivia Bearden was called home some 10 years ago after a long battle with... read more