Hale a ‘specialist’ in tree cultivation

“A university is judged by the beauty of its tree lines.” ―Amit Ray, Peace Bliss Beauty and Truth: Living with Positivity

He soon moved to a supervisory level, serving on the company’s committee on tree trimming safety.

With the passing of a 42-year time span Herschel’s interest in trees transformed into a passion. 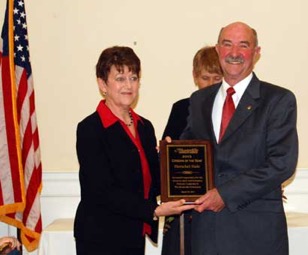 Herschel Hale, a resident of Montevallo for 29 years, has served as chair of the city’s Arbor and Beautification Committee for the past 15 years. (Contributed)

A resident of Montevallo for the past 29 years, this specialist in the cultivation of trees has served as chair of the Montevallo Arbor and Beautification Committee for the past 15 years. Hale, 76, has been involved with Tree City USA (part of the Arbor Day Foundation), a nationwide movement that provides the framework necessary for communities to manage and expand their public trees for 20 years.

Montevallo was awarded the Foundation’s annual Tree City designation in 2013.

Although an RSVP member since 2008, Herschel Hale got his start volunteering 50 years earlier.

As a young man he assisted neighbors in his community doing whatever was needed.

“I get more out of it than the people I volunteer with,” he said. “I thoroughly enjoy it. So many people need help. I’ve been ‘volunteering’ since I was around 25 years old.”

Hale is a volunteer with Shelby Emergency Assistance and is active in the community through his church, First Baptist Church of Montevallo, to assist citizens in need of food, clothing and other necessities.

Hale has rallied behind veteran causes supporting a number of veteran organizations and programs, including Blue Star Salute, Wreaths Across America and Support Committee for the Alabama National Cemetery.

Hale has been recognized for his spirit of volunteerism, service to his fellow man and support of his community and is the recipient of several awards, including SEA’s Volunteer of the Year, Employer Support of the Guard and Reserve’s (ESGR) Seven Seals Award for achievement, initiative or support which promotes and supports the ESGR’s mission.

Hale has logged over 9,000 volunteer hours since becoming an RSVP member.

His time and devotion have earned him the RSVP Gold and Lifetime Presidential Volunteer Award.

Hale married his wife, Nancy, 56 years ago. The couple met in 11th grade. They have three daughters, five grandchildren and one great-grandchild.

By DAISY WASHINGTON / Community Columnist “Jesus went about doing good. That’s what we have to do,” 70-year-old Peg Hill... read more