COLUMBIANA – A 26-year-old Clanton man, who previously listed an address in Alabaster, is set to stand trial on a pair of robbery charges in June, according to scheduling documents filed recently in Shelby County Circuit Court. 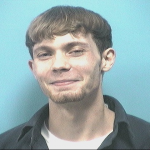 Christopher Terry Alberts, who lists an address on Chilton County 9 in Clanton, is set to stand trial on the charges beginning on June 10. He appeared in court for a pre-trial docket call on May 20.

The Pelham Police Department arrested Alberts on two felony counts of first-degree robbery on Sept. 9, 2015, after officers said he was involved in a “drug deal gone wrong.”

According to his arrest warrants, Alberts, while armed with a handgun, allegedly stole money and marijuana from an acquaintance. The alleged robbery took place on Aug. 17, 2015, at an extended stay motel in Pelham, and the Pelham Police Department was called to the scene.

A Shelby County grand jury indicted Alberts on the two felony robbery charges in January 2016. In February 2016, Alberts’ attorneys requested the suspect’s bond be reduced from $120,000, and claimed the bond was “inappropriately and unconstitutionally high.”

On May 25, 2016, Circuit Court Judge Lara Alvis lowered Alberts’ total bond to $60,000, per an agreement between the defense attorneys and prosecutors.

First-degree robbery is a Class A felony, according to Alabama law, and carries a maximum sentence of life in prison upon conviction.