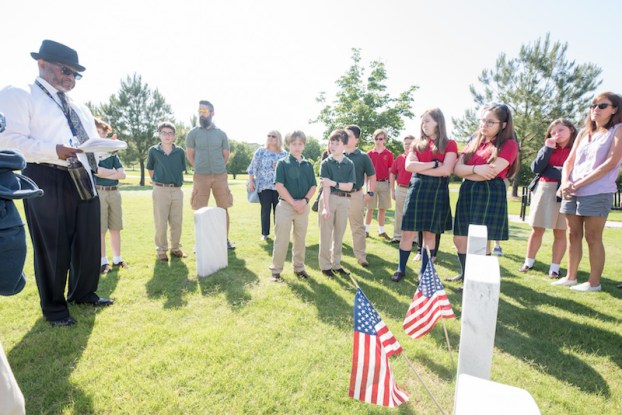 MONTEVALLO – A local school group’s visit to the Alabama National Cemetery on the morning of May 15 served as an extension of their history curriculum and a starting point for the cemetery’s new educational outreach initiative.

Nearly 40 fifth and sixth grade students from Evangel Classical Christian School in Alabaster toured the cemetery to learn more about the stories of veterans interred at the cemetery.

Their visit also marked the start of the ALNC’s implementation of the National Cemetery Administration’s Veterans Legacy Program.

“Its mission is to memorialize our nation’s veterans through sharing their stories of service and sacrifice,” ALNC Director Eldon Woodie said. “This is the community’s cemetery. All ranks, branches and religions are interred here.”

ALNC Administrative Officer Herman Watkins talked about the history of Taps, noting it is played at every military burial ceremony.

ALNC Foreman Brian Hudson said he and his workers prepare graves before families arrive for burial ceremonies and make sure the cemetery is presentable at all times.

“Everything’s got to be neat and clean so they know their loved ones are in a nice place,” Hudson said.

“As more of those veterans have now passed on with many interred at ALNC, I did not want their stories to end,” said SCALNC Chairwoman Pam Nichols, who has worked closely with teachers for several years to bring World War II veterans and their stories directly to classrooms. “I see the VLP as a great way to work with the excellent staff at ALNC to continue to bring their stories and those of other veterans to life.”

The students visited gravesites of World War II veterans from the European and Pacific Theaters; a WAVE who served on the home front; the wife of a Korean War POW, who served 27 months in captivity; a Vietnam veteran; Iraqi and Afghan War Marines who were killed in action; and an Air Force officer killed during a mission to Haiti in the 2010 earthquake.

“It makes me feel good because they didn’t have to pay for this,” sixth grader Haven Brown said. “They meant something to somebody.”

“They gave us and other countries our freedom,” sixth grader Anna Morgan said.

Parent Jamie Baxley said she brought her children to the cemetery briefly last summer, but appreciated another opportunity to visit and learn about it.

“Both of my grandfathers were in the Air Force,” she said. “I wanted (my kids) to see all the people that gave their lives for what we take for granted today.”

FROM STAFF REPORTS At the University of Montevallo President’s Outdoor Scholars end-of-year banquet on May 3, the Alabama Power Foundation... read more