ALABASTER – Kingwood Christian School senior Seger Bayer is described as the type of person who sets his goals early in life, and works diligently to reach them.

“Since meeting Seger, it has been obvious he was unique and specifically gifted,” according to Seger’s nomination letter. “Almost immediately, Seger assumed leadership roles at KCS and within his peer group. He has continued to lead academically, athletically and spiritually throughout his entire high school career.”

Bayer, 18, said he considers himself funny, involved, and a Christ-follower who is excited to graduate high school, but is still nervous about “the whole thing.”

Academically, Bayer ranks second in his class of 35.

This allows him to be a Student Government Association officer, where he has served all four years of high school, culminating with president his senior year.

He has also held the honors of Senior Beta Chaplain and vice president.

He is also currently the Mu Alpha Theta vice president.

In addition to his academic achievements, Bayer is described as “excelling in all areas of his life including spiritually, athletically, and service to others.”

“Without prompting, several years ago, Seger started a student-led weekly morning prayer service at KCS called ‘City on a Hilltop,’” according to his nomination letter. “He has assumed the leadership roles of many activities including soccer team captain, praise band chaplain, drama club chaplain and prom committee.”

“My favorite part of high school has been experiencing so many new things like soccer, dating, the freedom of driving, higher level math, prom and critiquing movies. I have gotten to grow a lot and I love that,” Bayer said.

Bayer said the most rewarding thing to happen to him in high school was when he was on the NXTGEN internship and he was told he had real potential to be a great children’s pastor.

A big achievement for him was also becoming an Eagle Scout, which he describes as the culmination of a lot of work.

Bayer said he enjoys both math and English. He loves math because there are rules with no exceptions and it all makes sense, and he loves English because “you can break every rule if you are good enough.”

After graduating in the fall, Bayer plans to attend the Oxford College at Emory in Atlanta, pursuing an educational studies degree.

Bayer said he wants to bring credentials to children’s ministry where he can one day become a children’s pastor.

Bayer is the son of Yogi Bayer and Cindy Hildebrand. He has two sisters, Sydney Bayer and Savannah Grace. 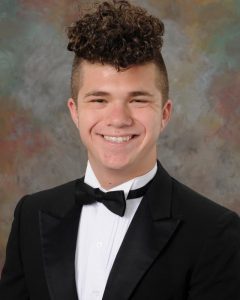 By EMILY REED / Special to the Reporter ALABASTER – Thompson High School seniors Ali’yah and Sha’liyah not only share... read more