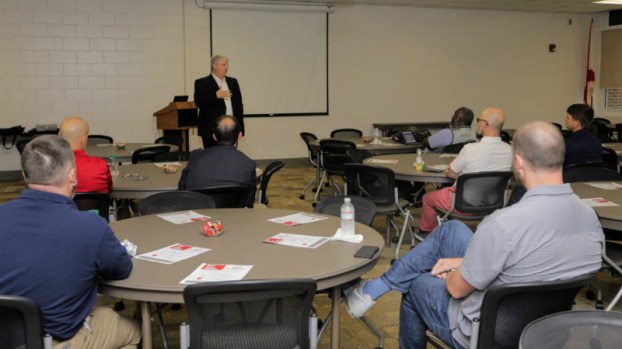 Shelby County Schools Superintendent Lewis Brooks is inviting dads to spend quality time with their children at school, something that research has shown will not only help to develop strong relationships between fathers and their children but also benefits the school and community.

Brooks invited a small group of fathers from schools across the district to a kickoff breakfast on May 10 to introduce them to All Pro Dads, a national organization that has 1,289 school chapters in 44 states.

In Alabama, there are currently 14 chapters in towns such as Auburn, Opelika, Birmingham and Huntsville. Brooks asked the men invited to the kickoff event to consider being team captains for chapters that will be officially organized by the start of the upcoming school year.

“I am excited to announce a new parent involvement initiative for the 2020 school year,” said Brooks. “All Pro Dads is a national organization connected to the nonprofit Family First. All Pro Dads gives fathers in our communities the opportunity to have breakfast with their child once a month. Each month will entail a theme that is important for kids to know and learn.

“Dads will serve as team captains and will help to draft other dads within the various schools in the district. We believe this initiative will be empowering for dads and great for our students.”

Brooks shared statistics with the men that show that Shelby County Schools—like most school districts—is heavily staffed by females, both in teaching, administrative and support roles.

Volunteers with local Parent Teacher Organizations also tend to be mostly moms. And, while the district does have male staff members serving in many critical roles, Brooks said he feels that students can benefit from quality time spent with their dads and other male role models.

The guest speaker for the kickoff was Spain Park High School’s head basketball coach Chris Laatsch, who is a father to seven children ranging in age from 18 to 26.

Laatsch spoke to the men in attendance about being intentional in developing relationships with each child, including getting to know each of their “love languages,” as defined by author Gary Chapman.

“It has always amazed me that my children are so very different even though they have the same mother and father and have been raised in the exact same environment,” said Laatsch. “I have to be very intentional about knowing and understanding each one of them.”

FROM STAFF REPORTS The Shelby County School’s counseling department recently named counselors who were honored as the 2018-2019 Counselors of... read more