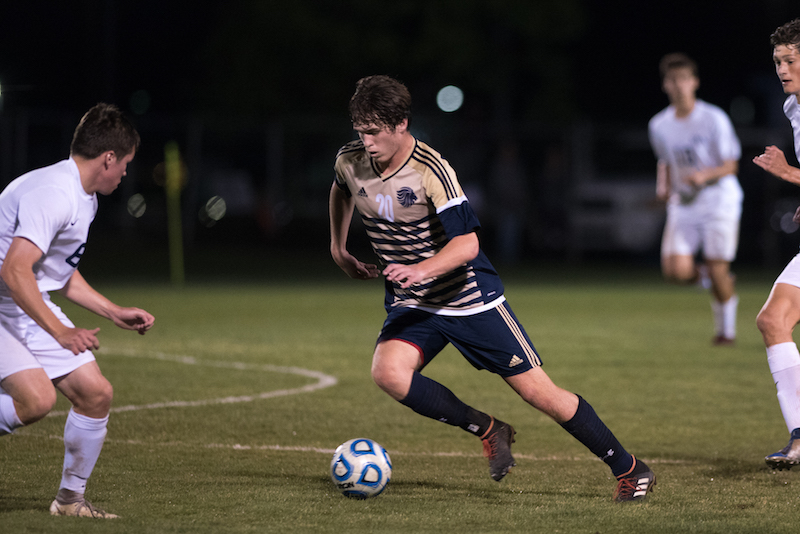 Briarwood’s Logan Frost has been named the 2019 Alabama Gatorade Boys Soccer Player of the Year, which marks the third year in a row a player from Shelby County has earned the honor. (File)

CHICAGO — A week after receiving the county’s top award as the Shelby County Player of the Year, Briarwood Christian’s Logan Frost has received one of the state’s top honors after being named the 2019 Gatorade Player of the Year by The Gatorade Company on Thursday, June 6.

Despite many great players through the Lions’ program, Frost is the first Gatorade Alabama Boys Soccer Player of the Year to be chosen from Briarwood Christian School.

It does, however, mark the third year in a row that a player from Shelby County has been named the Gatorade Alabama Boys Soccer Player of the Year after Kennedy Davis from Oak Mountain won it two years ago and Brooks Rice from Spain Park won it last year.

The award, which recognizes not only outstanding athletic excellence, but also high standards of academic achievement and exemplary character demonstrated on and off the field, distinguishes Frost as Alabama’s best high school boys soccer player.

By winning the award, he has also been named a finalist for the prestigious Gatorade National Boys Soccer Player of the Year award to be announced in June.

During his senior season with the Lions, Frost led his team on a redemption path after two heartbreaking losses in the previous two state championship games.

Along the way, he scored his 100th career goal at Briarwood before going on to post 24 goals during the season, which led to him ending his career with 112 goals.

That mark puts him third all-time in school history, while he also added 21 assists during his final season to pick up 80 in his career and finish fourth on the all-time list in that category.

With that goal and assist total, he posted 69 points as a senior, which was the highest mark in Shelby County this season.

His dominant presence and determination helped lead the Lions to a 21-1-3 overall record and to the redemption the Lions sought thanks to a 5-0 shutout victory in the Class 4A-5A State Championship game against Springville.

Frost earned the state championship MVP honor, was named an All-State First Team selection and repeated as the Shelby County Player of the Year.

“Logan is a difference-maker on the field,” said Matt Hall, head coach of Spain Park High. “Not only is he physically gifted with his size and speed, but his technical skills on the ball are excellent. He is a great dribbler and finisher.”

While his play on the pitch is seemingly flawless, what he has done off the field is one of his defining characteristics.

Before attending Briarwood for high school, Frost and his family served as missionaries for six years in Bolivia where they worked in an orphanage and assisted-living facility.

Locally, he has also taken time to give back, and aside from spending time on the soccer field for himself, he has also spent time as a voluntary coach for youth teams.

In the classroom, Frost has maintained a GPA of 4.27 and has signed to attend the University of South Carolina in the fall where he will look to continue a dominant soccer career.

As a part of Gatorade’s cause marketing platform “Play it Forward,” Frost also has the opportunity to award a $1,000 grant to a local or national youth sports organization of his choosing.

He is also eligible to submit an essay to win one of twelve $10,000 spotlight grants for the organization of choice, which will be announced throughout the year.

To learn more about the Gatorade Player of the Year program, check out past winners or to nominate student-athletes, visit Gatorade.com/POY.