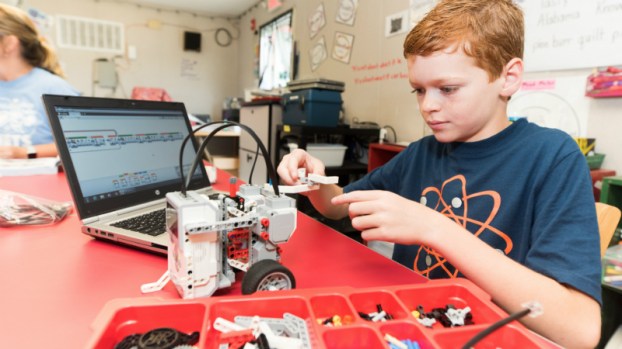 CHELSEA – Girls’ participation in science, technology, engineering and mathematics climbed after a national emphasis was placed on these academic disciplines, but at least one recent study showed participation is declining.

Bailey and Moody are doing what they can to make sure opportunities for STEM learning are plentiful at Chelsea Park, including hosting a Summer Robotics Camp from June 3-6 at the school.

“That is a language they will have to learn to speak,” she said.

More than 10 Chelsea Park students entering grades 3-6 participated, alternating between building robots in one room and testing them with challenges in another room.

Challenges included building and programming the robots to draw certain shapes through movements on a piece of paper, and climbing a obstacle and stopping exactly at a certain point.

Students had to make adjustments to the computer coding that controlled the bots in order to complete the challenges.

Rising fourth grader Hunter Smith said it took him more than 20 adjustments over a couple of days to get his robot to stop at the right spot.

“It couldn’t be too far or too little,” Smith said.

Rising fifth grader Luke Rumsey, meanwhile, figured out how to program his robot to draw a hexagon based on the code used for simpler shapes.

“I made this based off the triangle program,” Rumsey said, pointing at the coding sequence on one of the tablets used by the students to program the robots.

Some of the campers participated in an afterschool robotics program that has been offered at Chelsea Park. The afterschool program met once a week, but the summer camp allowed for both an introduction to robotics for newcomers and a deeper dive into the subject.

“This has been really good for more of the programming and coding than just the building (of the robots),” said Moody, who added that she enjoys seeing girls participate because too many have failed to see the opportunities presented by STEM disciplines. “They just don’t think they can be creative with it, and they can.”

FROM STAFF REPORTS More than 680 students in first through eighth grade were chosen to participate on their school’s Keyboarding... read more