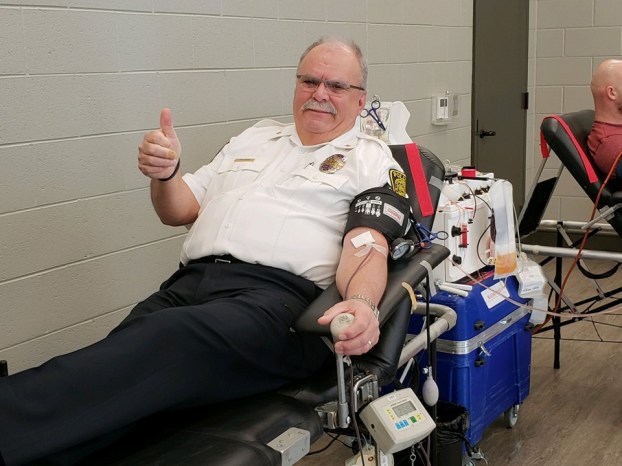 Chief Larry Palmer’s final day to work is June 21, and his official retirement date is Oct. 1. In this photo, Palmer is giving blood at a city-sponsored blood drive in January. (Contributed)

PELHAM – Police Chief Larry Palmer announced on Monday, June 10, that he will retire after more than three decades in law enforcement. Palmer’s final day to work is June 21, and his official retirement date is Oct. 1.

Palmer is a graduate of the 209th session of the FBI National Academy. He graduated from the University of Alabama Police Academy and holds a Bachelor of Science in Criminal Justice from Faulkner University.

“I will miss the employees and citizens of this great city,” Palmer said. “It has been my privilege to serve alongside some of the best in the business. The citizens of Pelham are passionate about their safety and have joined forces with this department to ensure that our city is one where people want to live, work and play.”

Palmer started his career in Pelham in 1986. He was promoted to sergeant in 1991. He achieved the rank of lieutenant in 1998 and captain in 2008. He was serving as deputy chief when he was appointed police chief in 2015.

Palmer requested the people of Pelham continue to support the police department after his retirement.

“Get involved. Assist your Pelham PD officers, so that together, we can continue to maintain the high quality of public safety that you expect from the department,” he said. “I will always remember my days with the men and women of the Pelham Police Department, and I will continue to pray for their safety.”