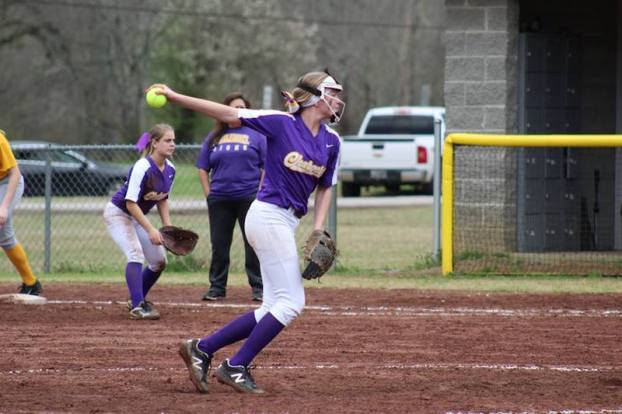 Cornerstone’s Jenna Castleberry, above, was one of the best pitchers and hitters in the county this season and earned a spot on the 2019 AISA/ACSC All-County softball team. (Contributed/Natalie Jones)

With the Evangel Lightning winning the ACSC State Championship and the Cornerstone Chargers spending the entire season ranked inside the top 10 of the AISA standings, we were treated to some spectacular softball from both during the 2019 season.

Those impressive runs from both wouldn’t have been possible without some stellar play from their entire teams, and below we highlight some of the players that helped take their team to a high level with the 2019 AISA/ACSC All-County softball team.

Pitcher: Jenna Castleberry, sophomore, Cornerstone. Castleberry was not only the top pitcher in the county but the top hitter as well. She batted .676 at the plate posting 46 hits and 47 RBIs. She posted 12 doubles and atied for a county-high 10 triples, while scoring 33 runs. In the circle, she tossed 100 innings this year and posted an ERA of .98 with 178 strikeouts. She finished the year with a 7-2 overall record.

Pitcher: Lola Jarrad, sophomore, Evangel. Jarrad wasn’t too far off the pace of Castleberry, and was the Lightning’s biggest key in winning the state championship. In the circle, she picked up 199 strikeouts in 169 innings and allowed less than three runs per game this season. At the plate, she held a batting average of .573 thanks to 59 hits with 43 RBIs and three home runs.

Catcher: Maggie White, senior, Cornerstone. White was another powerful hitter this season thanks to a batting average of .569. She ended the season with 29 hits, 17 RBIs, 31 runs scored, seven doubles, five triples, two home runs and 17 walks.

Infield: Susie Landis, sophomore, Evangel. Just a sophomore, Landis was a consistent threat offensively this season with a batting average of .429. She ended the year with four home runs and 36 RBIs, which ranked second on the team.

Infield: Chloe Thornton, senior, Evangel. Thornton, like Castleberry, also had 10 triples this season and held a batting average of .463 to help lead the Lightning to their state championship. She also added 20 RBIs with several clutch hits.

Infield: Tilly Early, junior, Cornerstone. Early averaged .386 at the plate with 22 hits this season, six of which were doubles. She ended the year with 24 RBIs and 16 runs scored, while walking eight times.

Outfield: Alanna Witten, junior, Cornerstone. During her final season with the Chargers, Witten posted a batting average of .410 thanks to 25 hits in just 61 at bats. She added 16 RBIs and 33 runs scored with three doubles and 14 walks.

Outfield: Ivie Littleton, eighth grade, Evangel. Littleton posted a batting average of .488 this season and was one of the best hitters at the plate with 40 total to her name. She also brought home 27 RBIs, which was fourth on Evangel’s team as an eighth grader.

Outfield: Kaylee Fowler, freshman, Evangel. Another player that batted above .400, Fowler finished 2019 with a batting average of .402 thanks to 39 hits. A total of 13 of those 39 hits were doubles, while she also drove in 20 runs and scored a team-high 38 runs.