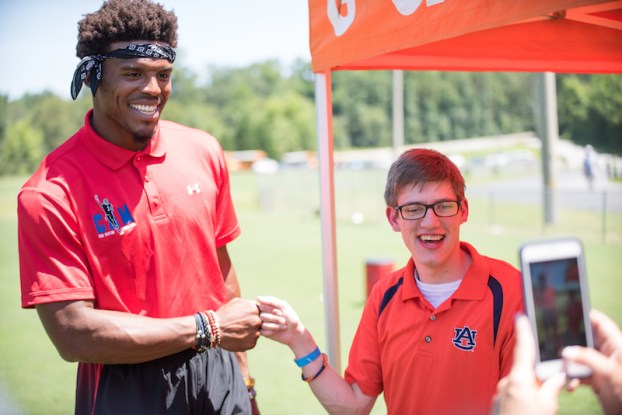 Cam Newton will bring his national 7-on-7 tournament to the BlackWatch Sports Complex off U.S. 280 for the second year in a row from June 28-29. (File)

NORTH SHELBY – For the second year in a row, Cam Newton will bring his national 7-on-7 tournament to the BlackWatch Sports Complex off U.S. 280.

The Cam Newton Foundation’s 7-on-7 tournament series will come to Shelby County Friday, June 28, through Saturday, June 29, as several highly touted high school football teams from across the state and Southeast will compete in the event.

While the tourney gives athletes the opportunity to compete against top teams, it also puts them in front of a three-time NFL Pro Bowler, an NFL MVP, a Super Bowl appearing quarterback, a Heisman Trophy winner and a National Championship winning quarterback in Newton, which makes the event such a popular draw for local teams.

Aside from the event taking place in Shelby County, last year’s tournament also featured one local team in the Montevallo Bulldogs.

After a 1-5 record in pool play, the Bulldogs had gotten off to a rough start but then bounced back during bracket play the following day with a 3-2 record.

In the end, the experience was one the players said they wouldn’t forget, and that it also gave them confidence moving forward playing in such a high profile event.

The Bulldogs went on to have a remarkable season in 2018 with a 9-2 overall record thanks to one of the best offenses in the state.

That is the kind of confidence building this tournament can give a team midway through the summer with the season now just two months away.

This local tournament will be the last of four Newton has put on this summer with previous stops in Georgia and South Carolina.

With the winner of each Regional tournament advancing to the Championship Tournament in July, it marks a big opportunity for each team competing to make some noise heading into the 2018 high school football season.

The event is put on by the Cam Newton Foundation, which was started in 2014 as a way to support young people with different backgrounds to give them hope for the future both on and off the field.

The motto for the foundation is “Every 1 Matters” according to the foundation’s website Cam1newton.com, which follows the three guidelines “Every 1 Learns, Every 1 Plays, and Every 1 Gives.”

Each of those slogans helps highlight what is important both in the game and beyond, highlighting education, giving everyone a chance and giving back to others.