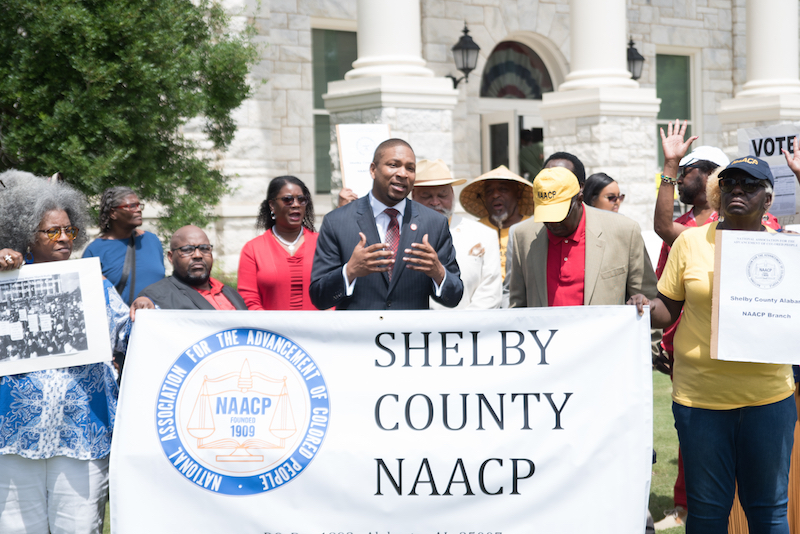 COLUMBIANA – Members representing the Shelby County chapter of the NAACP made their way to the front of the Shelby County Courthouse in Columbiana to hold a rally condemning the outcome of the Supreme Court case Shelby County v. Holder, as Tuesday, June 25, marked the six-year anniversary of the ruling.

The June 25 rally capped off a weeklong campaign called “Seven Days of Outrage” which began with the 9th annual Civil Rights Conference on June 17, and followed with a social media campaign titled “Lift Our Vote.”

“We’re outraged with what happened in 2013 in the Supreme Court decision of Shelby v. Holder that basically gutted the most important part of our voting rights,” Shelby County NAACP President Kenneth Dukes said at the rally. “This is our sixth annual rally and we’re not going to allow this to be forgotten or overlooked. We are teaming up with Lift Our Vote and several other organizations that’s coming together to show this has affected the whole country, not just Shelby County. We want to stand unified that it’s time that we have the right to vote without any form of disenfranchisement.”

Posters at the rally included words such as “every vote counts” as several speakers took to the mic to “educate, empower and engage the masses” about the Supreme Court ruling.

“Congress must pass the Voting Rights Advancement Act and restore our ability to prevent racial discrimination in voting so that we can build a democracy that truly represents America’s society,” Director of Lift Our Vote Jessica Barker said.

For more information on the Lift Our Vote campaign, visit Liftourvote.com.